Grow Text SizeShrink Text Size
Into a Volcano to Test Suitcase-Sized Science Lab
Some scientists will go anywhere for a proper test, including the mouth of a (sleeping) Hawaiian volcano. Dr. Inge Ten Kate, a University of Maryland Baltimore County research assistant, led an expedition into a cinder cone atop Mauna Kea, Hawaii, to test the prototype for an instrument that will be a miniature laboratory to discover the composition of rocks and atmospheres on moons, asteroids, and planets across the solar system. 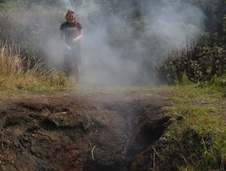 Inge Ten Kate prepares to take a sample of gas from a volcanic vent on Mauna Kea. Credit: Daniel Glavin
Print-resolution copy
The instrument is being built at NASA’s Goddard Space Flight Center in Greenbelt, Md., and Goddard scientist Dr. Daniel Glavin joined the expedition, which began January 29 and wrapped up February 5. Although the prototype weighs in at about 80 pounds and is about the size of a small dorm-room refrigerator, the team plans to shrink it to about the size of a suitcase, and give it a more manageable weight of around 20 pounds.

"The idea is that it could be carried and deployed by astronauts or small robotic rovers," says Ten Kate. The final version will be called VAPoR, for Volatile Analysis by Pyrolysis of Regolith, NASA-speak for heating up soil and analyzing the gases. The prototype contains tiny ovens that gradually heat samples to more than 2,500 degrees Fahrenheit (about 1400 degrees Celsius). As the temperature rises, different compounds vaporize and are directed into a mass spectrometer, which separates and identifies atoms and molecules based on their weight and electric charge.

Why a volcano? "The terrain and composition are similar to what we expect to find on the Moon, asteroids, and Mars," says Ten Kate. "Also, there will be outgassing from the volcano, so we can test our ability to measure trace gases in atmospheres. Finally, the differences among various areas on the volcano’s cinder cone will be subtle, so it’s a good test of our sensitivity and our ability to distinguish different regions." 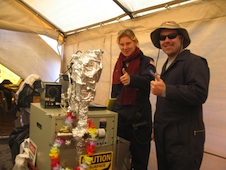 Inge Ten Kate and Daniel Glavin celebrate a successful test of the VAPoR prototype. Credit: Jack Farmer, Arizona State University
Print-resolution copy
The purpose of a field test is to uncover surprises, and the team certainly found some:

"Lesson 1 - errors that NEVER happen in the lab WILL happen to you in the field," wrote Ten Kate in her day-by-day account of the expedition at: http://vapor-fieldtesting.blogspot.com/ .

"After exchanging the blank for a real (1-meter deep wet) sample and leaving that at 50 °C for a while to get rid of the water, it was time to start measuring our second real sample! And then the Residual Gas Analyzer (RGA) gave up... A lot of trouble shooting later, it seemed that there's something wrong with the voltage going to the quadrupole rods of the RGA, so we decided to leave it baking at 200°C for a few hours to get rid of potential contamination and call the company tomorrow."

"Before leaving for the field site I had spoken to the company, who sent me a troubleshooting guide (why are those things not standard in the manual?). As soon as we had verified everything else was fine, we worked our way through the troubleshooting. After about 30 seconds we had identified the problem - 3 fried transistors."

"Chris Johnson, our irreplaceable VAPoR hero, had already confirmed that a new unit would be shipped out to get here by tomorrow 17.00. But to be on the safe side we decided to order replacement transistors for overnight shipping as well. Then we shut off VAPoR and covered it for a two-day hibernate. This gives me a good opportunity to emphasize that the reason that VAPoR is not working has nothing to do with the actual part we were testing, the oven, but with some commercial mass spectrometer."

"Lesson 2 - do NOT be stupid and go back to the field site around 23.00 to fill up the generator to keep everything warm. Around 15.30 we left the system up and running and hiked back to HP-lodge, where just after taking a shower I got a phone call that the generator had died (not out of gas, just dead). Sigh… But, the generator was replaced and by guiding the guy who replaced it, through the different panels on the front, everything seemed to be fine (apart from the bake out temperature that had dropped ~100 °C), so back up and running." 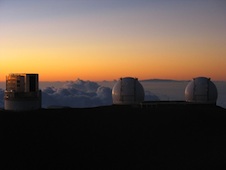 Sunset over the summit of Mauna Kea, considered one of the best sites in the world for astronomical observatories due to favorable atmospheric conditions. Credit: Inge Ten Kate
Print-resolution copy
But the team overcame these difficulties:

"We met all of our goals during the VAPoR field test on Mauna Kea which included the analysis of a volcanic gas vent sample as well as regolith collected from the crater surface down to 4 meters,” said Glavin. “The cold and dusty environment on the volcano was particularly challenging for VAPoR, and future modifications to the field unit including dust protection will be made prior to the next field campaign. Overall, we were extremely pleased with the performance of VAPoR and look forward to participating in other lunar and Mars analog field campaigns in the future."

And it was not all work:

"Around 8 PM Honeybees Kris and Jack and I went back to the site to refill my generator. After we were done we turned off the car lights and had the most beautiful view of the night sky and the Milky Way I've ever had. Everything was dark except for the stars. Very, very, very beautiful," said Ten Kate.

For more photos and the full account of the expedition, refer to: