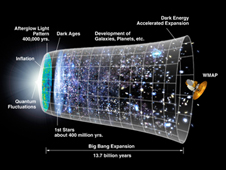 > View larger image
This graphic shows the universe as it evolved from the big bang to now. Goddard scientists believe that the universe expanded from subatomic scales to the astronomical in a fraction of a second after its birth. They now building, along with their university partner, an instrument that searches for clues that the inflation did, in fact, occur. Credit: NASA/WMAP Science Team Sophisticated new technologies created by NASA and university scientists are enabling them to build an instrument designed to probe the first moments of the universe's existence.

Goddard will provide most of the instrument’s sophisticated detectors and other state-of-the-art technologies that will allow the scientists to test the "inflation theory" of the universe's origin.

Considered a staggering idea just 30 years ago, the inflation theory postulates that the universe expanded far faster than the speed of light and grew exponentially almost instantaneously after the big bang, the moment the universe sprang into existence 13.7 billion years ago.

In particular, the telescope will search for a unique polarization pattern in the cosmic background radiation — the remnant light from the first moment of the universe’s creation that bathes the sky in all directions. Because of the size and expansion of the universe, scientists can study this ancient light only if their instruments are tuned to microwave frequencies.

If the cosmic growth spurt from inflation really happened, scientists say the event could have created gravitational waves, which are ripples in the fabric of space. The theory also predicts that these gravitational waves would have caused the background light to be polarized in a particular pattern. The telescope, therefore, will look for this signature pattern.

"Miraculously enough, it is within our ability to probe back into the first moments of the universe and learn what happened then," Bennett said.

The CLASS team, which also includes other partner institutions, will complete the instrument in 2014, equipping it with detectors sensitive to microwave light. The team then will ship the instrument to the Atacama Desert in northern Chile where it will observe large swaths of the microwave sky in search of the polarized signature.

Although scientists have yet to find the polarization pattern, they have uncovered tantalizing clues that inflation did, in fact, happen. Scientific results from the Goddard-developed Cosmic Background Explorer (COBE) found tiny temperature differences in the cosmic background radiation. These differences varied by only a few millionths of a degree and pointed to density differences that eventually gave rise to the stars and galaxies seen today.

COBE's successor, the Goddard–led Wilkinson Microwave Anisotropy Probe (WMAP), examined the tiny temperature differences in more detail and discovered new evidence for inflation. Among other things, WMAP showed that the geometry of the universe is close to flat — a physical dimension attributable to inflation. However, other theories explain these dynamics. What the scientific community needs is definitive proof of the primordial gravity waves — phenomena that could have been produced only by inflation.

CLASS is not the only effort aimed at finding the same telltale evidence. Another Goddard team is now building a balloon-based instrument, the Primordial Inflation Polarization Exploration (PIPER) that Principal Investigator Al Kogut hopes to launch in 2012. "CLASS and PIPER are perfect partners," said Goddard scientist Ed Wollack, who is involved in the CLASS project. "They share many technologies while spanning a wide frequency range. They will do great science while demonstrating the technologies for a space mission."

"The more frequencies you study, the better your chance of detecting the pattern of inflation," said David Chuss, a Goddard scientist working on CLASS.

The ultimate goal for the Goddard-JHU team is leveraging its expertise with CLASS and PIPER and winning a possible follow-on space observatory that would examine the primordial background light with even greater precision. "What we’re doing is very much what we need to do to be competitive for an observatory if NASA decides to launch one," Chuss said.