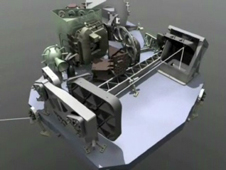 › View Animation
This animation shows how the NIRSpec Instrument will work by splitting up light into different spectra, and then reading the data as ones and zeroes (bits and bytes). Credit: EADS Astrium 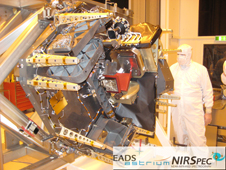 › Larger image
The NIRSpec Engineering Test Unit was provided by the European Space Agency, with EADS-Astrium GmbH as Prime Contractor. NIRSpec will be the principal spectrographic instrument on board the Webb telescope. Credit: EADS Astrium 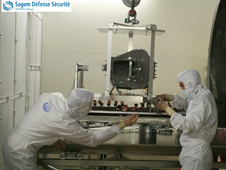 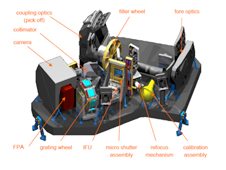 › Larger image
This figure shows a Computer Aided Design layout of the NIRSpec instrument. The instrument measures 190 cm (74.8 inches) across and weighs close to 200 kg (440 pounds). Credit: EADS Astrium The cosmos is filled with stars. However, the closest star beyond the Sun is so far away, that it would take the fastest spacecraft 75,000 years to reach it. Astronomers can't study the cosmos by sending probes to gather information about other stars, as we do with our own Sun and its planets. Fortunately they don't have to. The information comes to us at the speed of light!

The light of stars is produced by atoms and molecules that encode, in the starlight itself, key science information about their chemical composition, temperature, pressure, and velocity. To receive and extract this information, astronomers will use the James Webb Space Telescope and a first-of-its kind science instrument whose prototype has just arrived at NASA's Goddard Space Flight Center, Greenbelt, Md. from its manufacturer in Germany.

The Webb telescope contains a giant 25 square meter (~30 square yard) mirror that will collect the faint light from distant stars and feed it to one of four science instruments that are each designed to extract a specific type of information contained in the light itself. One of the most scientifically powerful instruments is a Near-Infrared multi-object Spectrograph (NIRSpec) that disperses the white star light into a spectrum so that the contribution of individual atoms and molecules in the star can be seen. The atoms and molecules in the star imprint lines on this spectrum that uniquely fingerprint each chemical element and reveal a wealth of information about physical conditions in the star. Spectroscopy (the science of interpreting these lines), is among the sharpest tools in the shed for exploring the cosmos.

Many of the objects that the Webb will study, such as the first galaxies to form after the Big Bang, are so faint, that the Webb's giant mirror must stare at them for hundreds of hours in order to collect enough light to form a spectrum. In order to study thousands of galaxies during its 5 year mission, the NIRSpec is designed to observe 100 objects simultaneously. The NIRSpec will be the first spectrograph in space that has this remarkable multi-object capability. To make it possible, Goddard scientists and engineers had to invent a new technology micro-shutter system to control how light enters the NIRSpec.

Although the night sky appears black, it's not really dark. If your eyes could see in the infrared, the night sky would appear to glow just as the daytime sky glows at visible wavelengths. The infrared glow of the night sky, known as the Zodiacal light, is produced by a cloud of dust that surrounds the Earth and Mars that the Webb must look through. Observing the first galaxies through this Zodiacal light, is analogous to observing stars during the daytime with your eye. To prevent the NIRSpec from being blinded by the Zodiacal light, the Webb telescope forms a magnified image of the sky onto a programmable array of 250,000 shutters that are each the diameter of a human hair. Shutters under objects in this image for which a spectrum is desired, are commanded open allowing their light to enter the NIRSpec. The remaining shutters are held closed to minimize the Zodiacal light that can enter NIRSpec and reduce its sensitivity.

The NIRSpec micro-shutter system is one of 10 technologies that had to be invented to make the Webb mission possible. During the Webb mission, each shutter must withstand approximately 100,000 open/close cycles while operating at 40 K (-230 oC). In order to make the large NIRSpec instrument light enough to fly on the Webb, its structure and optics are made of an advanced ceramic material called silicon carbide. The NIRSpec is among the most advanced astronomy instruments ever built.

NASA Goddard has a lot invested in the NIRSpec. Goddard built NIRSpec's detector and microshutter systems. EADS/Astrium is the European Space Agency's (ESA) prime contractor for the overall NIRSpec instrument. The prototype instrument was integrated and tested at Astrium's facility in Munich, Germany, before being shipped to Goddard.

Now that it has arrived at Goddard, the NIRSpec prototype will go through pre-integration testing with electronic and mechanical systems of the Webb's Integrated Science Instrument Module (ISIM). Along with the other prototype instruments, the NIRSpec will be fitted into the ISIM flight structure, which is also currently at Goddard. These prototype instrument models are flight-like in form, fit, and function. They enable engineers to develop and practice integration and test procedures before handling the actual flight units.

The Webb Telescope project is managed at NASA's Goddard Space Flight Center in Greenbelt, Md. The telescope is a joint project of NASA, the European Space Agency and the Canadian Space Agency, and will launch in 2014.


For more information about the NIRSpec, visit:


For more information about spectroscopy, visit:


For the companion press release, visit: