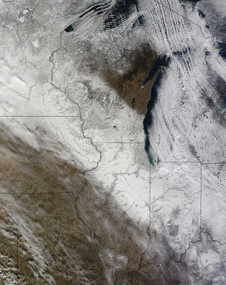 The MODIS instrument on NASA's Terra satellite captured this image of snow on December 7, 2010 at 17:05 UTC (12:05 EST). Snow appears on the ground in eastern Minnesota and Iowa, southwestern Wisconsin, northern Illinois, much of Indiana, northern Kentucky and western Ohio. The white area over Lake Michigan and southeast into northern Indiana and Ohio are clouds. Credit: NASA Goddard MODIS Rapid Response Team
› Larger image NASA's Terra satellite captures daily visible and infrared images around the Earth and took a daytime image of a blanket of snow in the Upper Midwest this week. Even though astronomical winter is less than two weeks away, the central and eastern U.S. are already experiencing meteorological winter.

The residents of the upper Midwest are already feeling the effects of winter this week, with high temperatures in the 20s and 30s, and wind chills in the single numbers (Fahrenheit) or colder.

Today's satellite image of snow on the ground in the upper Midwest is proof of an early meteorological winter. It was captured by the Moderate Resolution Imaging Spectroradiometer or MODIS instrument on December 7, 2010 at 17:05 UTC (12:05 EST). MODIS is an instrument that flies aboard NASA's Aqua and Terra satellites.

On Saturday, December 4, a low pressure area moved through the Tennessee Valley and generated snowfall from eastern Iowa and Minnesota east through Wisconsin, northern Illinois, Indiana and through the Ohio Valley.

The MODIS image shows snow on the ground in eastern Minnesota and Iowa, southwestern Wisconsin, northern Illinois, much of Indiana, northern Kentucky and western Ohio. The snow extends farther east, but that area was out of path of the Terra satellite as it captured this image. What it does show, though, is that winter conditions have arrived before astronomical winter did. Residents in these areas of the U.S. hope it leaves early, too. Rob Gutro
NASA's Goddard Space Flight Center, Greenbelt, Md.
› Back To Top