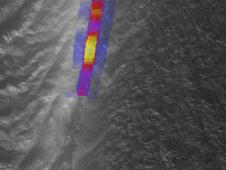 This image shows Damascus Sulcus, the most active fissure, or "tiger stripe," on Saturn's moon Enceladus. Cassini's CIRS provided the high-resolution thermal infrared data, shown in color. These data give scientists confidence that the peak temperature here was about 190 Kelvin (minus 120 degrees Fahrenheit); this is slightly higher than the previous maximum temperatures (around 170 Kelvin or minus 150 degrees Fahrenheit) measured by CIRS at Damascus. Credit: NASA/JPL/Goddard/SWRI/SSI
› Full image and caption
› See image gallery 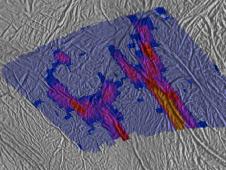 This high-resolution heat intensity map reveals never-before-seen details of warm fractures that branch off like split ends from the main trenches of two "tiger stripes" on Saturn's moon Enceladus. The intensity of thermal radiation, measured at wavelengths from 12 to 16 micrometers, is color-coded: dark blue, purple, red and orange denote progressively more intense radiation, due to higher temperatures and/or larger expanses of warm material. Credit: NASA/JPL/Goddard/SWRI/SSI
› Full image and caption New images and data from NASA's Cassini spacecraft give scientists a unique Saturn-lit view of active fissures through the south polar region of Saturn's moon Enceladus. They reveal a more complicated web of warm fractures than previously thought.

Scientists working jointly with Cassini's Composite Infrared Spectrometer (CIRS) and its high-resolution imaging camera have constructed the highest-resolution heat intensity maps yet of the hottest part of a region of long fissures spraying water vapor and icy particles from Enceladus. These fissures have been nicknamed "tiger stripes." Additional high-resolution spectrometer maps of one end of the tiger stripes Alexandria Sulcus and Cairo Sulcus reveal never-before-seen warm fractures that branch off like split ends from the main tiger stripe trenches. They also show an intriguing warm spot isolated from other active surface fissures.

"The ends of the tiger stripes may be the places where the activity is just getting started, or is winding down, so the complex patterns of heat we see there may give us clues to the life cycle of tiger stripes," said John Spencer, a Cassini team scientist based at Southwest Research Institute in Boulder, Colo.

The images and maps come from the Aug. 13, 2010, Enceladus flyby, Cassini's last remote sensing flyby of the moon until 2015. The geometry of the many flybys between now and 2015 will not allow Cassini to do thermal scans like these, because the spacecraft will be too close to scan the surface and will not view the south pole. This Enceladus flyby, the 11th of Cassini's tour, also gave Cassini its last look at any part of the active south polar region in sunlight.

CIRS is Cassini’s thermometer. It functions at a distance, by measuring Enceladus’s emission at mid- and far-infrared wavelengths. "The distribution of warm fissures near the south pole remains enigmatic," said Michael Flasar, the Principal Investigator for CIRS and a scientist at NASA's Goddard Space Flight Center. "The unevenness seen in the heat output along the fissures is really interesting, because it says something -- we don’t know what yet -- about how the heat is delivered from the interior. Any changes in this pattern that are seen in later flybys, as well as the absence of change, should provide important clues to the nature of the heat transport from below and perhaps its source."

Spencer said he isn't sure if this tiger stripe is just more active than it was the last time Cassini’s spectrometer scanned it, in 2008, or if the hottest part of the tiger stripe is so narrow that previous scans averaged its temperature out over a larger area. In any case, the new scan had such good resolution, showing details as small as 800 meters (2,600 feet), that scientists could see for the first time warm material flanking the central trench of Damascus, cooling off quickly away from the trench. The Damascus thermal scan also shows large variations in heat output within a few kilometers along the length of the fracture. This unprecedented resolution will help scientists understand how the tiger stripes deliver heat to the surface of Enceladus.

Cassini acquired the thermal map of Damascus simultaneously with a visible-light image where the tiger stripe is lit by sunlight reflecting off Saturn. The visible-light and thermal data were merged to help scientists understand the relationships between physical heat processes and surface geology.

“Our high-resolution images show that this section of Damascus Sulcus is among the most structurally complex and tectonically dynamic of the tiger stripes,” said imaging science team associate Paul Helfenstein of Cornell University, Ithaca, N.Y. Some details in the appearance of the landforms, such as a peculiar pattern of curving striations along the flanks of Damascus, had not previously been noticed in ordinary sunlit images.

The day after the Enceladus flyby, Cassini swooped by the icy moon Tethys, collecting images that helped fill in gaps in the Tethys global map. Cassini's new views of the heavily cratered moon will help scientists understand how tectonic forces, impact cratering, and perhaps even ancient resurfacing events have shaped the moon's appearance.

The Cassini-Huygens mission is a cooperative project of NASA, the European Space Agency and the Italian Space Agency. The Jet Propulsion Laboratory, a division of the California Institute of Technology in Pasadena, manages the mission for NASA's Science Mission Directorate, Washington. The Cassini orbiter and its two onboard cameras were designed, developed and assembled at JPL. The imaging operations center is based at the Space Science Institute in Boulder, Colo. The CIRS team is based at NASA's Goddard Space Flight Center, Greenbelt, Md., where the instrument was built.