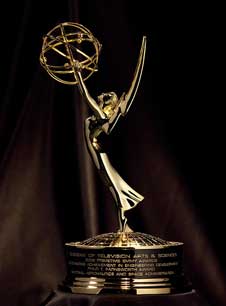 > View larger image
The 2009 Philo T. Farnsworth Primetime Emmy Award Statue given to NASA Television in recognition for engineering excellence and technological innovations that made possible the first live TV broadcast from the moon by the Apollo 11 is shown on Aug. 19, 2009 at NASA Headquarters in Washington. Photo Credit: NASA/Bill Ingalls RELEASE: 09-193

WASHINGTON -- NASA Television has been honored with a Primetime Emmy Award by the Academy of Television Arts & Sciences. The 2009 Philo T. Farnsworth Award recognizes the agency for engineering excellence and commemorates the 40th anniversary of the technological innovations that made possible the first live TV broadcast from the moon by the Apollo 11 crew on July 20, 1969.

For more information about NASA TV, including program schedules and how to watch programs on the Web, visit: > NASA TV