> Welcome to the Planets: Jupiter

> RETURN TO THE MOON

LARGEST: A Science on a Sphere Production

Giant of the Solar System

This is big.
But you know that much already.
Three hundred and eighty million miles from Earth, the solar system’s largest planet spins like a sizzling top in the night, massive and powerful beyond all comparison short of the sun itself. It’s therefore only fitting—and certainly about time—that the fifth planet receive its proper cinematic due, set naturally on the most appropriate cinematic platform. With the movie LARGEST, Jupiter comes to Science On a Sphere.

LARGEST examines the gas giant like a work of art, like a destination of celestial wonder. Starting with the basics, the movie examines the gross anatomy of the immense planet. From swirling winds to astounding rotational velocity to unimaginable size, Jupiter demands nothing less than a list of superlatives. But where general description sets the stage, LARGEST parts the curtains on humanity's experience with the fifth planet. The movie takes us on a journey to this immense sphere via dramatic fly-bys with some of the most astounding robotic probes ever designed. Then, with NASA instruments trained on the striped behemoth, the drama really begins.

As recently as the summer of 2009, Jupiter once again became the subject of media attention, following extraordinary events there visible from Earth. According to images collected from astronomers around the world, an immense objects collided with the fifth planet, something large enough that the resulting blast scar nearly matched the size of our the entire Earth.
(You can see the latest information about Jupiter’s recent smash-up here.
http://www.nasa.gov/mission_pages/hubble/main/jupiter-hubble.html)

This cosmic crash reminds us that the solar system is a dynamic, kinetic place. Things move around; things collide.

LARGEST tells the tale. In a now legendary encounter between a huge comet and the implacable fifth planet, viewers will experience the doomed Shoemaker-Levy 9 as it falls into Jupiter's great gravitational well and crashes into the planet's colorful bands of dense atmosphere. But LARGEST takes the story one step further, suggesting vital relevance of such an encounter there on Jupiter for everyone here on Earth. The implications not only may surprise you, but also provoke contemplation. Any way you look at it, Jupiter matters.

Facts demand data. Telling a factual story like LARGEST demands lots and lots of data—the kind of high quality, one-of-a-kind data for which NASA is famous. But in the making of LARGEST, the moviemakers faced a tremendous challenge: there simply isn't much to go on as far as data that describes and displays the complete planet. What we know about the Jovian system is largely based on distant observations and relatively brief encounters with desperately rare interplanetary probes.

Early on, the production team also decided to minimize the use of conceptual imagery. In other words, the team decided not to mock up an "artificial" planet in their labs. But in deciding to use as much real data as possible to tell the story, the team faced dramatic creative dilemmas.

The best example is the challenge of showing a fully spherical image of a place rarely observed from all sides. For color images of the entire planet, the production team took fourteen known frames of data collected by the Cassini spacecraft and squeezed them for every possible drop of visual power. Through a sophisticated process of analysis and interpolation, one of the lead data visualizers took known values for wind speeds and applied that information to the various corresponding points in the image. Extended over time and applied to each subsequent frame, the result is an astounding animation of a fully dynamic planet, with moving, grinding clouds cascading around the sphere like liquid.

In other places where image size or digital resolution or angles of observation simply do not provide clear views of the planet, the production team had to find other ways of telling the story. In several places, they turned once again to data, but this time not the kind of data that directly yields images.

Using a table of coordinates that mathematically describe where objects in space may be at specific times, visualizers calculated the orbits of objects in Jupiter's busy sky, a swarming hive of natural satellites. The result is astonishing and beautiful. At the center of the image, we see a familiar orange and red planet, set against a seamless starry background. In close to the giant, a series of nearly concentric orbits of Jovian moons circle endlessly, speeding around the immense parent at ferocious rates.

Then the camera pulls back, and for a moment nearly twenty million miles of emptiness unspools. Jupiter falls away, a speck disappearing into the starry void. But then, suddenly, a huge cluster of new orbital tracks come tumbling onto the screen. These distant moons are distributed much more chaotically relative to the planet. The team came to call this tangled, crazy web of nearly forty orbits "the bird’s nest". The mass of intersecting, overlapping trails seems to fully surround the now distant, clearly powerful mass somewhere deep down inside the sphere of gravitational influence.

Ultimately, LARGEST presents Jupiter in a way that tells the story of our grandest planetary neighbor like it's never been done before. The movie compels and excites as it informs and educates.

"LARGEST" opens around the country and in several locations around the world on September 15, 2009. For a partial list of Science On a Sphere theaters, click here. 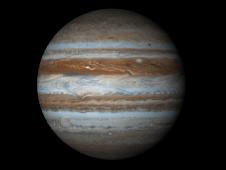 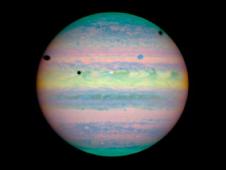 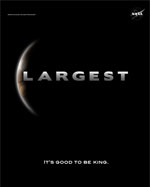 About 'Science On a Sphere'

The Science On a Sphere platform is a novel cinema-in-the-round technology developed by the National Oceanic and Atmospheric Administration. Viewers see Earth suspended in darkness as if they were in space.

But just as thrilling as this unusual -- and unusually realistic -- look at the planet’s structure and behavior is the sheer fun and fascination of looking at a spherically shaped movie. Science On a Sphere literally bends the rules of cinema, revealing new ways to tell exciting, valuable stories of all kinds.

How 'Science On a Sphere' Works 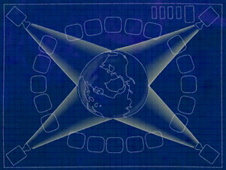 'Science On a Sphere' Demonstration 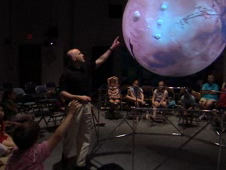