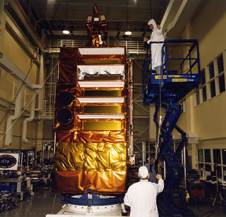 Technicians work on RXTE in 1995. Credit: NASA/Goddard
› Larger image The Rossi X-ray Timing Explorer (RXTE) satellite provided unprecedented information into the extreme environments around white dwarfs, neutron stars, black holes and other X-ray-emitting objects. Over 16 years of operation, RXTE far exceeded its original science goals and has left astronomers with a scientific bounty that will serve them for years to come.

The observatory's instruments measured variations in X-ray emission on timescales as short as microseconds and as long as months across a wide energy span, from 2,000 to 250,000 electron volts. For comparison, the energy of a typical dental X-ray is around 60,000 electron volts.

RXTE's timing capability was crucial in capturing the rapid X-ray changes associated with neutron stars, also known as pulsars. A neutron star is the closest thing to a black hole that astronomers can observe directly, crushing half a million times more mass than Earth into a sphere no larger than a city. This matter is so compressed that even a teaspoonful weighs as much as Mount Everest. Neutron stars can spin hundreds of times a second.

RXTE data established the existence of highly magnetized neutron stars (known as magnetars) and discovered the first accreting millisecond pulsars, a hitherto unseen stage in the formation of "recycled" millisecond radio pulsars that were first glimpsed in the early 1980s.

The mission also detected X-ray signals from hot gas in the rapidly swirling accretion disks around black holes. These observations will help astronomers better understand how black holes re-direct some of this gas into oppositely directed jets of matter moving at nearly the speed of light. No one knows how these jets form deep in the disk, just outside the black hole, but the phenomenon occurs in binaries containing minimal-mass black holes — about three times the sun's mass — as well as in the million-solar-mass supermassive black holes found at the centers of galaxies. The observatory also provided the first observational evidence of "frame-dragging" in the vicinity of a black hole, an effect predicted by Einstein's general relativity theory.

At the time of its 1995 launch, RXTE's instruments gave the mission capabilities previously unavailable on an X-ray satellite. It could measure changes in X-ray flux that occurred in less than one ten-thousandth of a second, enabling it to track fast-moving material near neutron stars and black holes, and could rapidly point to almost any spot in the sky, permitting the craft to observe desired targets quickly.

The spacecraft carried two instruments, the Proportional Counter Array (PCA) and the High Energy X-ray Timing Experiment (HEXTE), that could be directed to specific targets. The PCA was developed by NASA's Goddard Space Flight Center to cover the lower part of the energy range, while HEXTE was built by the University of California, San Diego for exploring the upper energy range.

A third instrument, called the All-Sky Monitor, was developed by the Massachusetts Institute of Technology (MIT) in Cambridge. It scanned about 80 percent of the sky every orbit, giving astronomers the ability to monitor the variable and often unpredictable X-ray sky and to record long-term histories of bright sources.

The astronomical community has recognized the importance of RXTE research with five major awards. These include four Rossi Prizes (1999, 2003, 2006 and 2009) from the High Energy Astrophysics Division of the AAS and the 2004 NWO Spinoza prize, the highest Dutch science award, from the Netherlands Organization for Scientific Research.

The spacecraft was originally named the X-ray Timing Explorer. It was launched aboard a Delta II 7920 rocket at 8:48 a.m. EST on December 30, 1995, from Launch Complex 17, Pad A, at the Cape Canaveral Air Station in Florida. The mission was renamed in early 1996 in honor of Bruno Rossi, an MIT astronomer and a pioneer of X-ray astronomy and space plasma physics who died in 1993. RXTE was developed, built, tested and operated by NASA's Goddard Space Flight Center in Greenbelt, Md.