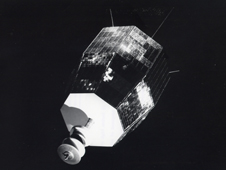 This 1964 image shows the 172-pound Relay spacecraft. The satellite was 33 inches high and 29 inches in diameter at its broad end. The exterior was covered with 8,215 solar cells. Credit: NASA (photograph G-64-1573)
› Larger image Along with passive communications satellite experiments (Echo), NASA planned a modest low-altitude active satellite project for the early 1960s. The Department of Defense had responsibility for a synchronous-orbit satellite system (Advent), so the space agency confined its research and development activities to low- and medium-altitude communications satellites. In November 1960, NASA awarded a contract to Space Technology Laboratories for a feasibility design study for an active communications satellite, and by the following January officials were briefing industry on the agency's requirements for Project Relay. As a result of the Soviet Union's "space spectaculars" of 1961 and President John F. Kennedy's subsequent support of a strong U.S. space program, NASA's communications satellite program received supplementary funds that made it feasible to support active satellite research. In May 1961, the Radio Corporation of America (RCA) was awarded a contract to fabricate three Relay satellites.

Relay was designed with three objectives in mind: to test transoceanic communications, to measure radiation in its orbital path, and to determine to what extent these high- and low-energy electrons and protons would damage the satellite's solar cells and diodes. The Relay satellites were built with redundance as a major feature; they carried two sets of every major system of circuits. Relay's most important component, the microwave repeater, received frequency-modulated signals from one or two ground stations, amplified these signals and retransmitted them. To coordinate and define Relay's main international experiments, an International Ground Station Committee was formed.

Thor-Delta rockets launched Relay 1 (Dec. 13, 1962) and Relay 2 (Jan. 21, 1964) into elliptical orbits, from which they successfully retransmitted television, telephone and digital signals. Relay 1 did not function properly at first because of an abnormal power drain on its storage batteries, but the problem was traced to the voltage regulator in a transponder. A second transponder was used as a backup, and the mission went on as planned. By March 1963 Relay 1 had fulfilled its mission objectives. According to Lou Nicholson, retired employee of Goddard's Projects Directorate, Relay transmitted live television signals from the United States to Great Britain in 1963 for Winston Churchill's honorary U.S. citizenship ceremony. The satellite went on to transmit the first transpacific television signals between Japan and the United States in November. In fact, Relay 1 worked too well. It would not respond to commands to turn itself off in December 1963 and continued relaying signals until February 1965.

Relay 2 was equipped with upgraded solar cells designed to extend the satellite's power supply. The satellite's traveling wave tubes, power regulation system and radiation shielding were also of an improved design. The second Relay's initial public demonstration took place on Jan. 29, 1964, when a portion of the winter Olympics in Innsbruck, Austria, was transmitted to the United States via Relay and ground stations in France and Maine. After a successful demonstration career, Relay 2 was retired in the fall of 1965.

In February 1964 Goddard recommended not launching a third Relay (originally the backup satellite) because of how well the first two Relays were accomplishing their missions. The Relay Project was managed at NASA Headquarters by Joseph R. Burke (Relay 1) and Donald P. Rogers (Relay 2), working in Leonard Jaffe's Office of Communications and Navigations Programs. At NASA's Goddard Space Flight Center, Joseph Berliner and Wendell S. Sunderlin were project managers for Relay 1 and Relay 2, respectively.