Grow Text SizeShrink Text Size
ATS
The overall objective of the Applications Technology Satellite (ATS) program was to investigate and flight-test technological developments common to a number of satellite applications. Each of six ATS spacecraft carried a variety of communications, meteorology, and scientific experiments, in addition to providing a platform for evaluating three different kinds of spacecraft stabilization systems.

Designers at Hughes Aircraft Company and the Goddard Space Flight Center built on the successful Syncom communications satellite design for the first five ATS spacecraft. The sixth and final ATS was built by Fairchild Industries. The first five ATS spacecraft were launched by Atlas-Agena and Atlas-Centaur rockets. ATS-6 was launched with a Titan IIIC. All launches took place at NASA's Kennedy Space Center.

A planned seventh satellite (ATS-G) was canceled due to budget cuts in early 1973, and NASA directed Fairchild Industries to mothball the spacecraft. 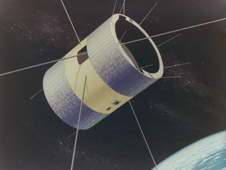 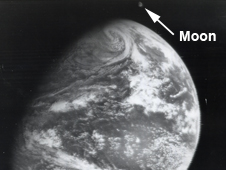 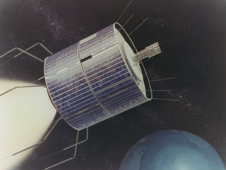 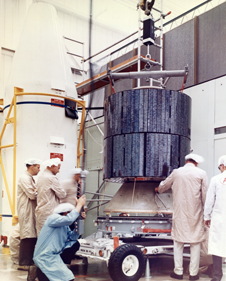 Technicians work with one of the ATS satellites in 1967. Credit: NASA
› Larger image 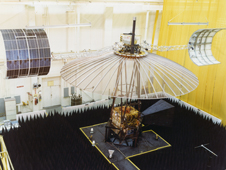 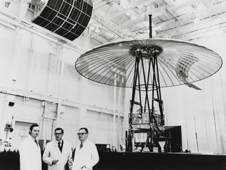 Photograph of ATS-6. The gentleman at the left in this picture is John Thole, one of the ATS-6 project managers. Credit: NASA
› Larger image ATS-1 (Launched Dec. 7, 1966)

During its 18-year lifetime, ATS-1 examined spin stabilization techniques, investigated the geostationary environment, and performed several communications experiments. Its VHF experiment tested the ability to act as a link between ground stations and aircraft, demonstrated collection of meteorological data from remote terminals, and evaluated the feasibility of using VHF signals for navigation. It also transmitted educational programs and provided health, research, and community services to the United States and several Pacific locations, including the Cook, Mariana, Marshall and Caroline islands, as well as West and American Samoa, Melanesia, New Zealand and Australia. The mission also provided the first full-Earth cloud cover images.

ATS-1 carried a black-and-white weather camera which transmitted the first full-disk Earth images from geosynchronous orbit. On Dec. 22, 1966, ATS-1 captured the first image of Earth and the moon together, a feat often mistakenly attributed to Voyager 1. (Voyager 1 captured the first single-frame image that showed the entire Earth and moon.) ATS was 22,300 miles from Earth and more than 270,000 from the moon when the photo was taken.

ATS-1 was deactivated on Dec. 1, 1978. Of the satellite's 12-year life span, useful data was received for the first six. The communications hardware was still functioning in 1985, however the spacecraft did not respond as intended to its commands and it slipped into a useless orbit.

A full-size replica of ATS-1 hangs in the atrium of the Newseum in Washington, D.C.

A second-stage launch vehicle failure put ATS-2 into an undesirable orbit. Atmospheric torques in this orbit overcame the satellite's gravity gradient stabilization system, and caused a slow tumble. Although the satellite remained functional, ATS-2 was deactivated after six months due to the limited amount of useful data it could collect.

The goals for ATS-3 included investigations of spin stabilization techniques and VHF and C-band communications experiments. In addition to fulfilling its primary mission, it also provided regular communications service to sites in the Pacific basin and Antarctica, provided emergency communications links during the 1987 Mexican earthquake and the Mt. St. Helens disaster, and supported the Apollo moon landings with real-time TV transmissions for broadcasting by Radio Caracas in Venezuela. The satellite also provided regular cloud cover images for meteorological studies, as well as NASA's first space-based color images of Earth. (The U.S. Air Force's DODGE satellite launched in 1967 produced the first overall.)

ATS-3 was deactivated along with ATS-1 on Dec. 1, 1978. Of the satellite's 11-year life span, useful data was received for the first eight.

ATS-4 was to investigate the possibilities of a gravity gradient stabilization system. A launch vehicle failure stranded ATS-4 in a much lower than planned orbit, making the satellite nearly useless. Despite this, NASA engineers successfully turned on several of the experiments to collect as much information as possible during the craft's short life. The low orbit and resulting atmospheric drag caused ATS-4 to re-enter Earth's atmosphere and break apart on Oct. 17, 1968.

The ATS-5 was to investigate the possibilities of using gravity as a satellite stabilization system. The experimental goals of ATS-5 included using L-band signals to precisely locate ships, testing an electric ion engine, evaluating the attenuation effects on RF signals by rain, and performing C-band communications tests.

However, following the firing of the satellite's apogee kick motor, ATS-5 went into an unplanned flat spin. The vehicle recovered and began spinning about the correct axis, but in the opposite direction. As a result, the spacecraft's gravity gradient booms could not be deployed, and some experiments were not functional. The spacecraft was able to perform some of its experimental goals, and was finally boosted above geostationary orbit at the end of its mission.

The ATS-6 was a much heavier, more sophisticated satellite than its predecessors. ATS-6 was a 3 axis stabilized spacecraft which deployed a 9.14-meter diameter (about 30 feet) antenna reflector. In addition to its technology experiments, ATS-6 became the world's first educational satellite and the first satellite able to track sub synchronous S-Band satellites. It was the precursor to the present TDRSS.

During the Apollo-Soyuz mission the ATS satellite tracked and relayed the Apollo spacecraft telemetry to Houston Control center during 55 percent of its orbit and also provided the TV link from the Apollo-Soyuz docking in 1975 to the Houston Control center and for commercial broadcasting outlets. During its 5-year life, ATS-6 pioneered direct-broadcast TV. It retransmitted educational programming to India, the United States and other countries. The vehicle also conducted air traffic control tests and practiced satellite-assisted search-and-rescue techniques. It carried an experimental radiometer that subsequently became a standard instrument aboard weather satellites. The spacecraft was operational through August 1979.