Gorillas in the Midst of Extinction 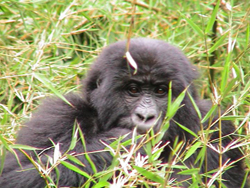 There are parts of the world where conservationists have a hard time doing their work. Scientists and land managers often fight uphill battles to protect key lands. Impediments can include wars, local poverty, remote locations, getting governments to work together, and lack of information on the best places to focus limited resources. Now, NASA is providing satellite imagery and funds to help conservationists track remote wild areas where until now it has been close to impossible to get information on land cover and land-use change. 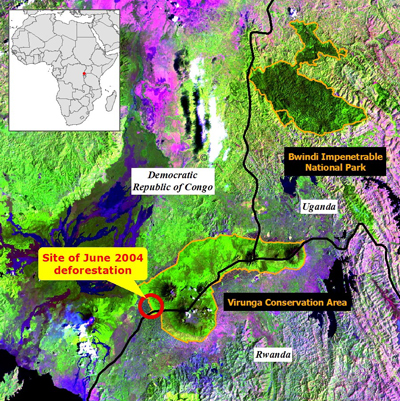 Image above: This map shows the location of the Virunga Conservation area within Africa, and highlights an area in the "Mikeno" sector of the park where rapid deforestation occurred in June 2004. Credit: Nadine Laporte/ Tiffany Lin

During the last 10 years, migrating refugees from ethnic wars and local people in search of farmlands have encroached on the park. The fertile volcanic soil, cooler temperatures and lower malaria risks have drawn people to the surrounding area, making it currently one of the most densely populated parts of Africa, with up to 500 people per square kilometer. In a single week in June of 2004, farmers created pasture for their cattle by clearing 15 square kilometers (5.8 square miles), or 6 percent, of the 264-square kilometers (102 square miles) of mountain gorilla habitat that make up the "Mikeno" sector.

The Virunga Conservation Area offers habitat to 380 of the world's 700 remaining mountain gorillas. The other 320 gorillas reside in the nearby Bwindi Impenetrable National Park in Uganda. Because mountain gorilla numbers had increased by close to 56 individuals over the last 10 years, the recent loss of land was a considerable step backward.

In a race against time for the mountain gorillas and many other species indigenous to the remaining natural areas, scientists at the Woods Hole Research Center (WHRC) in Woods Hole, MA, are working with NASA and conservationists in the Virunga National Park to stave off further destruction of the lands. 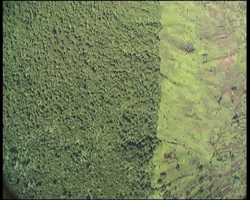 Image right:This aerial photo taken in April 2004 shows the park border in the Mikeno sector. The forest lies on the left, with agricultural lands on the right. Credit: Steve Gulick

"Remote sensing is the only tool that we have to efficiently monitor these remote parks," says Nadine Laporte, head of the Africa Program at WHRC. "Satellite imagery allows park managers to update park property boundaries, map forest habitat, and look at encroachment of the park by comparing images from two different dates."

Laporte is working with conservation groups to create a monitoring system that combines NASA satellite imagery with aerial flight and field surveys, all of which can be relayed to and coordinated with local park rangers on the ground. Currently, park workers are building a three-foot wall along key park borders to keep out cattle and people seeking to alter the land. 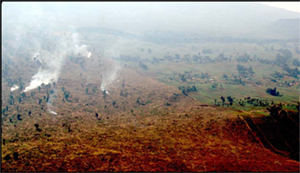 Image left: This photo from June 6, 2004, shows deforestation within the national park boundary on the Congo-Rwandan border. Greener cultivated areas on the right of the picture are outside the National Park, in Rwanda; brown areas with burning vegetation are the areas within Virunga National Park in Congo. Credit: Merode et al., 2004.

"Laporte's work demonstrates how remote sensing can be used to monitor significant land cover changes in highly threatened environments like Virunga," said Woody Turner, a program scientist at NASA's Office of Earth Science. "Here is a place where it all comes together. A small, threatened area with high population density, where remote sensing allows people to see clearing of the forest and where images can be used to monitor such areas."

The most useful imagery that NASA provides for high-resolution surveys comes from the Landsat satellite and the ASTER (Advanced Spaceborne Thermal Emission and Reflection Radiometer) instrument on the Terra satellite. The resolution from these satellites allows scientists to identify deforestation fronts and map habitats. Commercial very high-resolution imagery can see ground areas as small as 1 to 4 meters, but most parks find these images still too expensive.

Fortunately, NASA now provides free Landsat images, which researchers and rangers are using as base maps for field surveys. "We still have to integrate remote sensing with traditional surveys on the ground," said Laporte. "They really complement each other. The rate of change is so rapid that we need satellite imagery in a timely fashion to address the problems in the area. Aerial imagery is too expensive."

Since gorilla habitat crosses three different countries, satellite imagery provides data and perspectives that are not bound by political borders. The satellite images can create a convenient method for exchanging information among the three parks that make up the Virunga Conservation Area.

Along with mapping and monitoring changes in forest cover, a time-sensitive series of images can allow researchers to estimate rates and patterns of deforestation in and around protected areas. These patterns are also studied in relation to trends in human migration.

In the future, Laporte and other conservationists hope to have access to low cost near real-time imagery. "The use of NASA derived products to document the state of the protected areas in the tropics is still limited, but it is a tremendous contribution to conserving biodiversity," says Laporte. "The recent working agreement between NASA and IUCN to advance conservation through the use of NASA data sets is certainly great news." The World Conservation Union (IUCN) is considered the world's premiere source of information on the environment.

The Africa Program at the Woods Hole Research Center is funded though NASA's Land Cover Land Use Change program, the US Agency for International Development (USAID), and the Wildlife Conservation Society.