Glaciers Surge When Ice Shelf 'Brakes' Break Up
For decades, scientists have been trying to determine the rate at which our planet's climate is changing. Since local temperatures can vary widely across regions from one year to the next, it would be unwise to just place thousands of thermometers and other climate-monitoring instruments around the world. By the 1980s and 1990s, researchers found they could measure average global temperatures by using satellites to monitor heat-sensitive objects on the ground. Of these objects, glaciers are among the most reliable indicators of climate change. 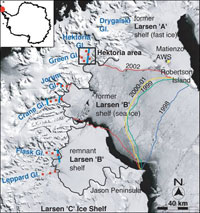 Image to right: This satellite image from NASA's MODIS sensor aboard the Terra spacecraft shows the Larsen B Ice Shelf region on 1 November 2003. Red dots indicate sites where ice flow speed was measured using more detailed Landsat 7 images. The colored lines track the retreat of the Larsen B Ice Shelf during the past 6 years, and the black line shows the coastline, or "grounding line," where the thick ice begins to float off the sea floor. Blue lines on the glaciers show the location of laser elevation profiles from ICESat. A weather station location marked in the upper right of the image map ("Matienzo AWS") has tracked atmospheric warming in summers over the past 30+ years in the region. Click on image to enlarge. Credit: National Snow And Ice Data Center (NSIDC)

Now, two new NASA-funded studies show that ice shelves -- platforms of ice that extend from the shore into the ocean -- act as buttresses, or braking systems for glaciers that flow into them. The studies also suggest that climate warming can lead to sea level rise. The research relied on NASA, Canadian, and European satellite data.

As a result of climate warming, large ice shelves in the Antarctic Peninsula disintegrated in 1995 and 2002. Typically, ice shelves advance over the ocean for several decades until they become unstable, at which point large pieces break off and float away. Scientists had been observing the Larsen B ice shelf in the Antarctic Peninsula for several years, when suddenly, it disintegrated in a mere 35 days, between January 31 and March 7, 2002. Over this period, the ice shelf lost 1,255 square miles - an area somewhat larger than Rhode Island - sending a fleet of icebergs into the Weddell Sea.

To the casual observer, icebergs and glaciers may seem to be rigid and unchanging but in fact, they deform and flow continuously. A glacier is a large mass of ice that acts like a thick river, flowing downhill under the influence of gravity. Once the depth of glacial ice reaches 18 to 30 meters (60 to 100 feet), there is enough pressure from above to cause the ice pack to slowly "creep" or flow downhill. As long as new snow is added at the top, a glacier will continue to move forward.

Images/animation above: Click on either image to view animation (1.5 MB). This animation zooms into the Larsen Ice Shelf on August 8, 2000, melt ponds on its surface. The visualization was created using RADARSAT data of Antarctica, Landsat 7 data of Larsen Ice Shelf area, and finally Landsat panchromatic band (15m) data. Credit: NASA/USGS

In another study, Ted Scambos of the National Snow and Ice Data Center (NSIDC) and others used Landsat 7 images of the Antarctic Peninsula from both before and after the Larsen B breakup, and found very similar results. The images showed deep holes and splits on the surfaces of glaciers. By tracking the movement of these holes, in sequence from one image to the next, they were able to measure the speed and movement of the glaciers.

In this study, NASA's ICESat satellite data also showed that this increased flow speed caused glacier elevations to drop, lowering them by as much as 38 meters (124 feet) in six months.

The results show how quickly Antarctica may respond to climate warming since the changes in flow and elevation occurred at such a rapid pace. Climate records over the past 50 years show that while regional air temperatures have decreased in much of the Antarctic, in the Antarctic Peninsula they have increased by 2.5 degrees Celsius (4.5 degrees Fahrenheit), or about five times the rate of warming measured for the rest of the world.

Such warming also causes increased flow of land ice into the oceans and contributes to sea level rise. While the melting of the Larsen area glacier is too small to affect sea level significantly, the example offers insight into what could happen when climate change spreads to regions further south, where glaciers are much larger.

Still, many questions remain about the link between our future climate and changes in the Antarctic. A decline in ice and snow cover decreases albedo, the amount of sunlight reflected toward space. This works to warm ocean waters and promotes thinning ice. Other research has shown that as ice shelves warm, the actual strength of the ice may change. Free water between the ice crystals could lead to disintegration. Warmer temperatures also reduce the sea ice protecting the ice shelf from the ocean swell, further enhancing ice breakups. 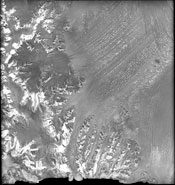 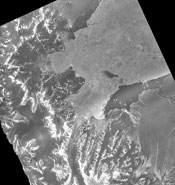 Images above: (Click on either image to view Radarsat series from 1996 to 2003) This series of radar images shows change in the ice shelf configuration between 1996 and 2003. The first image was derived from the European Space Agency's (ESA) ERS-1 satellite and the last four from the Canadian Space Agency's (CSA) Radarsat-1 satellite. Credit: ESA (for the 1996 image) and CSA (for the other four images)

But it's also possible that warmer temperatures will increase evaporation, leading to a spike in precipitation, with possible increases in snow cover, leading to increased albedo and cooler conditions.

In the future, as satellite records lengthen and this data is fed into climate models, researchers will have a better idea of which scenario is more likely. While a warming climate is clearly the biggest player in the present sea ice changes, other influences, like a changing Sun, and natural climate fluctuations may also be to blame.

For more information and images on the Internet, visit: