Researchers Find Frozen North May Accelerate Climate Change
NASA-funded researchers have found that despite their sub-zero temperatures, a warming north may add more carbon to the atmosphere from soil, accelerating climate warming further. 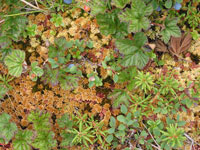 Image to right: The UF study suggests that climate warming in the arctic tundra may cause the release of much more carbon dioxide than previously expected. Even though plants grew more, and more carbon was stored in plants and in the surface of the soil, the whole ecosystem did not gain carbon. Instead, it lost a tremendous amount from the deepest soil layers, probably because increased nitrogen accelerated the breakdown of soil carbon. Click on image to enlarge. Credit: Ted Schuur

The research focused on the Arctic tundra. The tundra is a treeless area between the icecap and the tree line, with a permanently frozen layer of soil under topsoil. It has low-growing vegetation like shrubs and mosses that "breathe" in carbon dioxide (CO2) for food.

The study suggests that warming in the Arctic tundra may release much more CO2 than previously expected, more than the plants can use for food. Because CO2 is a greenhouse gas, putting more in the atmosphere enhances the chance of further climate warming.

"The 3 to 7 degree Fahrenheit rise in temperature predicted by global climate computer models could cause the breakdown of the Arctic tundra's vast storage of carbon in the soils," said Michelle Mack, lead author on the study and an ecologist at the University of Florida (UF), Gainesville, Fla. 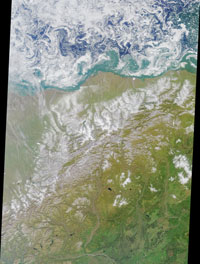 Image to left: This colorful image of the Arctic National Wildlife Refuge and the Beaufort Sea was acquired by the Multi-angle Imaging Spectroradiometer on August 16, 2000. The Refuge encompasses a variety of arctic and subarctic ecosystems, including coastal lagoons, barrier islands, arctic tundra, and mountainous terrain. Click on image to enlarge. Click here for high resolution image. Credit: NASA/GSFC/LaRC/JPL, MISR Team.

One-third of the Earth's soil carbon is locked in northern latitudes. In those areas low temperatures and water-saturated soil slow the breakdown of organic matter such as leaves. Bacteria, fungi and other organisms break them down. A temperature rise would release more CO2 from the soil into the air than plants are able to take in.

To recreate a warming climate, scientists added nitrogen and phosphorous fertilizer to the soil. That created conditions that imitated the release of nutrients from decomposing organic matter. The findings were collected in a 20-year experiment at the Arctic Long-Term Ecological Research site near Toolik Lake, Alaska. The National Science Foundation and NASA funded the research.

The scientists thought the fertilizer would help plant growth, remove carbon from the atmosphere and eventually add it to the soil in the form of dead leaves and roots shed by plants over time. Thus, the whole ecosystem was thought to be gaining carbon after fertilization.

Image to right: The findings were collected in a 20-year experiment of the effects of fertilization on the arctic tundra at the Arctic Long-Term Ecological Research site near Toolik Lake, Alaska. Toolik Field Station is located in the foothills of the Brooks Range on Alaska's north slope and is administered by the Institute of Arctic Biology at the University of Alaska Fairbanks. Click on image to enlarge. Credit: Andrew Balser, Institute of Arctic Biology, University of Alaska Fairbanks

Mack and her colleagues found exactly the opposite. Even though plants grew more, and more carbon was stored in plants and in the surface of the soil, the whole ecosystem did not gain carbon. Instead, it lost a tremendous amount from the deepest soil layers, probably because increased nitrogen sped up the breakdown of organic matter by soil organisms. The breakdown of matter released carbon dioxide.

Edward Schuur, a UF ecologist who co-led the project said places such as the northeastern U.S. and Europe, where acid rain has increased the amount of nitrogen deposited into the ecosystem from the atmosphere, also could experience an increased loss of soil carbon in response to higher nitrogen inputs.

"It may be that not just Arctic ecosystems, but those in other parts of the world will have a similar decomposition response to increased nitrogen," Schuur speculated.

NASA sponsored research projects are selected through peer review and intended to improve the quality of life through the exploration and study of Earth's system, the solar system and the Universe.