NASA Sees Hurricane Isabel From Cradle to Grave
In 2003, a hurricane named Isabel was born out of Africa on August 22. As she moved across the warm open waters of the Atlantic Ocean, she grew up, she gained strength, and she packed her bags for the United States.

Image to right: This animation follows 2003's Hurricane Isabel from its surprising birthplace in the Ethiopian Highlands of East Africa, across the Atlantic Ocean, and to the United States. Note how Isabel gains size and speed over the warm waters of the Atlantic. Click on image to view animation (3.07 MB) Credit: NASA

When Isabel arrived in North Carolina on September 18, she made a name for herself, by packing hurricane force winds as she came ashore.

Images above: As Isabel cruises across the Atlantic and changes in intensity, the distribution of rainfall and heat inside the storm is fluctuating dramatically. The "warm core" of the hurricane (inset window) is the engine that drives the storm, allowing it to draw up energy from the ocean, gathering strength and size. Click on each image to view a different animation. (1.26 MB - animation one, 984 Kb - animation two, 792 Kb - animation three) Credit: NASA

Image to left: A powerful storm churns up colder, deeper waters and leaves a trail of cool in its wake. If another storm comes along and intersects with this cold water trail, it's likely to lose significant strength due to the fact that the colder water does not contain as much potential energy as warm water. Click on image to view animation. (1.24 MB) Credit: NASA 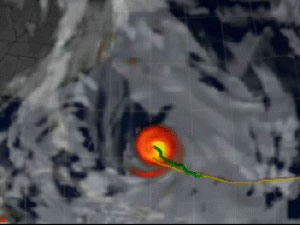 Image to right: A recent improvement in hurricane modeling techniques is just starting to emerge from NASA, promising great strides in understanding these giant storms. In this sequence showing five days in the life of Hurricane Isabel, you can see how closely the artificial storm (in green) matches the real world observations (in yellow) as it actually happened. Click on image to view animaton. (1.65 MB) Credit: NASA 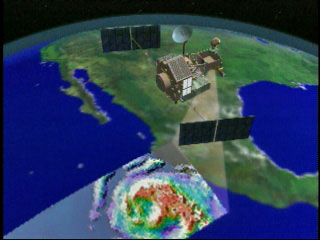 Image to left: This new insight into hurricane formation and structure would not be possible without a dedicated fleet of space-based observatories. By combining the unique assets of several distinct federal agencies, scientists have been able to extract information and insight into the structure and processes of hurricane behavior that otherwise would have been impossible prior to a space faring era. Click on image to view animation. (1.43 MB) Credit: NASA