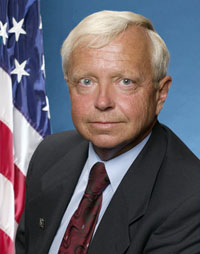 Credit: NASA Goddard Dr. Edward J. Weiler was the 10th director of NASA's Goddard Space Flight Center. He was appointed to this position effective August 2, 2004. In May 2008, Dr. Weiler accepted a position at NASA Headquarters as associate administrator of the Science Mission Directorate. Dr. Weiler resigned from NASA, effective Sept. 30, 2011.

As Goddard's center director, Dr. Weiler led efforts between NASA and NOAA to forge a new agreement for the next generation of geostationary weather satellites, GOES R. Under this agreement, NOAA will implement the program and lead the development and approval of acquisition strategies, while NASA Goddard will be responsible for implementing the GOES-R flight project, including the development of the command and control system and for supporting advanced technology developments for instruments and spacecraft subsystems on GOES-R and future NOAA geostationary programs.

Before being named director, Dr. Weiler was the associate administrator for NASA's Space Science Enterprise. He served in that capacity from 1998 to 2004, and under his leadership, the Enterprise experienced a period of extraordinary scientific discovery, including the successful deployment of the Chandra and Spitzer “great observatories,” the NEAR Shoemaker mission which conducted the first long-term, close-up study of an asteroid, the WMAP and FUSE missions which are providing fundamental discoveries concerning the age, composition and fate of the universe, and how the first stars and galaxies were formed billions of years ago, and an ambitious program to explore Mars, including the Mars Odyssey and Mars Exploration Rover missions.

Prior to his appointment as associate administrator, Dr. Weiler served as the Director of the Astronomical Search for Origins Program at NASA Headquarters in Washington, D.C., where he was responsible for an ambitious effort to find answers to questions like, “where did we come from,' and “are we alone. One of the astronomical tools that NASA is using to understand the origins of the universe is the Hubble Space Telescope, and it is that program that has distinguished much of Dr. Weiler's career as one of NASA's leading astronomers and managers.

Dr. Weiler served as the Chief Scientist for the Hubble Space Telescope from 1979 until 1998, giving voice and advocacy to the HST Program on behalf of the astronomy community. Weiler held the post as Hubble's top scientist through the telescope's early development, during the tumultuous period that followed the discovery of the observatory's flawed primary mirror, and through a triumphant series of servicing missions that gave Hubble its unprecedented view of the universe and made it the most productive scientific instrument ever developed and a world-wide icon for scientific exploration.

Dr. Weiler joined NASA Headquarters in 1978 as a staff scientist and was promoted to the Chief of the Ultraviolet/Visible and Gravitational Astrophysics Division in 1979.

Prior to joining NASA, Dr. Weiler was a member of the Princeton University research staff. He joined Princeton in 1976 and was based at the Goddard Space Flight Center as the director of science operations of the Orbiting Astronomical Observatory-3 (COPERNICUS).

Dr. Weiler received his Ph.D. in astrophysics from Northwestern University in 1976. He has published numerous papers in the scientific journals.

Dr. Weiler's scientific expertise and commitment to excellence have earned him numerous distinctions over the years.

For his lead role in the Hubble science program for nearly two decades, Dr. Weiler was awarded the NASA Outstanding Leadership Medal and the 1994 Presidential Rank Award of Meritorious Executive.