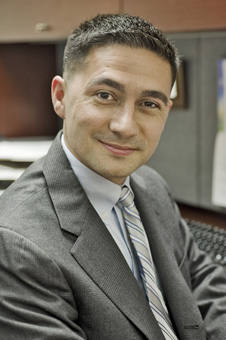 Felipe Romo
Credit: NASA/Goddard/Chris Gunn Felipe Romo, a Contract Specialist in Code 210.9, the Procurement Operations Division, is responsible for providing support to the James Webb Space Telescope. He is responsible for the Near Infrared Camera (NIRCam) Instrument contract with University of Arizona and the contract with the Space Telescope Science Institute for the ground support of the Science and Operations Center.

Felipe grew up in the very small town of Encarnacion de Diaz, Jalisco, Mexico. He came back to the United States in 1992 and, upon arrival, faced many challenges. The most significant of which was the language barrier. Other challenges included financial means to pursue higher education, military deployments, and family separation.

Felipe was the first in his family to ever go to college and obtain a master’s degree. Neither of his parents was able to finish grade school. Most of his family worked in construction. Knowing he wanted more out of life, Felipe joined the U.S. Army right after high school. He spent eight years in the logistical field and was deployed to Kuwait, Kosovo, and Qatar. After serving eight years in the Army, he transferred to a civilian position at Walter Reed Army Medical Hospital as a Supply Management Specialist.

While at Walter Reed, Felipe took advantage of the GI Bill and received a bachelor’s degree in information technology and continued on to get his master’s degree in business administration. Felipe joined Goddard in April 2008 as a Contract Specialist in the Space Sciences Directorate, where he worked for about 18 months before joining the James Webb Space Telescope Program.

Felipe always dreamed of a better life and wanted to set an example for his family and others to set their dreams high and to work hard to achieve them. When asked who inspired him, Felipe says, “Many of my military leaders had excelled and they inspired me to want to do better.”

He also added, “My work ethic comes from my father. Everything he did, he did it with excellence.” His father was a very hard worker. Felipe seeing this as a child has made him the hard-working, dedicated employee he is today. From his father, he learned to give everything his best.

Felipe credits God for everything in his life. He said, “He was always with me even after I left home and especially during my deployment during the war in 2003.”

One of the things he enjoys most about his job is the opportunity to work with people that have a history of changing the way we view our world and the universe. Felipe said, “It is an honor to be part of an organization that continues to challenge the limits of science and exploration.”

Outside of Goddard, Felipe is involved in Grace Community Church in Fulton, Md. and Corner Stone Bible Church in Hanover, Md. Felipe lives in Laurel, Md. with his wife, Gabby, and their 2 children, Felipe and Jackie. Lynn Chandler
NASA's Goddard Space Flight Center, Greenbelt, Md.
› Back To Top