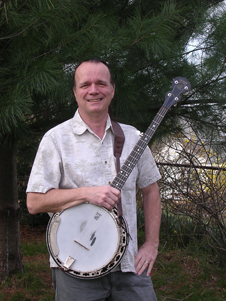 Drake Deming with his banjo.
Credit: NASA/Goddard As a boy, Dr. Drake Deming, the Senior Scientist for Extrasolar Planet Studies, had a guitar, but all he really wanted to do was play the banjo. One summer, he bought a banjo in a pawn shop. He found learning to play the banjo harder than learning to play the guitar because the banjo “has a lot of complex picking patterns and requires more right hand to left hand coordination.”

A few years ago, John Annen, a co-worker, took up playing the banjo. Deming went to Annen’s house one evening and ended up coming home with a new banjo. The next logical step, obviously, was attending bluegrass banjo camp. He has already attended two of them. According to Deming, “I’ve never taken weekly, formal lessons from an area instructor. That’s why I go to the bluegrass camps where I get a lot of instruction.” Although not a singer himself, he plays generally known music so he can always find a singer. He does, however, hum along.

In 2009, Deming spent a week at the NashCamp outside of Nashville, Tennessee, the Nation’s center for country, bluegrass, and now other kinds of music making. NashCamp is based at the Drouillard Mansion, which Deming describes as “a lovely location like something out of “Gone with the Wind.” Deming said, “It is amazing how many bluegrass camps you can find by Googling ‘bluegrass camp.’” Like other bluegrass camps, NashCamp offers instruction in banjo, fiddle, guitar, bass, mandolin, Dobro (a resonator guitar), and singing. The instructors are all from around Nashville and many are national, award-winning players themselves. More importantly, Deming describes then all as being “very patient.”

The accommodations were quite lovely. There were three campers to each cabin which had modern plumbing. Food was catered by a leading Nashville restaurant. Deming observes that “you do not go to this camp to lose weight.”

A typical day began with a four hour group master class on banjo. After lunch, there was a selection of two hour seminars on specialized topics such as “How to Work Together with Other Instruments in a Band.” From later afternoon into the evening, there were impromptu jam sessions. Deming noticed a young boy who kept asking questions during the first seminar. In the middle of a demonstration of a song by the professional instructor, the instructor pointed to the boy who then joined in playing the song on the banjo and then Dobro as well as the instructor. It turns out that this boy was a twelve year old musical prodigy. Deming observes that “The young people really put you in your place. They are really talented. It’s not like science. A twelve year old is not going to be comparable to an adult scientist. But in music there are a lot of young prodigies.”

Most evenings the campers were treated to concerts by various Nashville professionals on the mansion’s wrap-around porch. Deming observed that some of their instructors also participated and that more than a few of them were truly sweating before performing. Deming declared that “the evening concerts were the biggest thrill” of his entire camp experience.

Near the end of the week, the instructors organized the campers into bands. Each band then played two numbers at Nashville’s Station Inn, the premier bluegrass club in the world for live performances.

Deming’s wife joined him in Nashville for a few days following camp. They attended a performance at the Grand Ole Opry by Little Jimmy Dickens whose signature song for the last 45 years has been “May the Bird of Paradise Fly Up Your Nose.” Although neither Deming nor his wife particularly like country music, they both enjoyed the humorous and fun performance.

Later that year, Deming participated in Camp Bluegrass at South Plains College in Levelland, Texas which offers classes in bluegrass and country music as well as certificates in commercial music. This time, Deming spent the week in a dormitory eating institutional food. Camp Bluegrass is headed by Alan Munde, whom Deming describes as “a very, very famous bluegrass banjo player and instructor.”

Most days, Deming attended classes in the morning followed by structured jam sessions in the afternoon. “A structured jam is more like band practice with an instructor directing the players,” explains Deming. He chose Bill Evans, the author of “Banjo for Dummies,” as his instructor and pronounced him to be “the best teacher I’ve been exposed to.” He spent his evenings at concerts given by well known, professional bluegrass musicians.

Deming is already thinking about his next bluegrass camp, which may be located closer to home. “The D.C. area has traditionally been a hotbed for traditional bluegrass music. We have many nationally known bluegrass bands. We even have a bluegrass camp in Maryland,” says Deming. Until then, he will continue to attend weekly jam sessions with a Bowie-based group which includes Annen. His goal is “to be in a local group and play the banjo for beer.” He has no desire to make recordings. Deming observes that “I’m a simple-minded person. I like simple melodies and old-fashioned music. I don’t like complex, modern bluegrass that sounds almost like jazz.” He plays a Deering Sierra banjo, which he describes as “a professional model banjo without the fancy inlays.”

He also points out a NASA connection to banjos. According to Deming, “I have heard that there is a NASA developed aluminum that is used in banjo tone rings because of its unique resonance properties. The tone ring is placed under the head of the banjo to add mass and therefore more resonance. Resonance enhances the tones, which is all important within the banjo community.”

Deming concludes that “Banjo experts can tell one twang from another. There are certain kinds of twangs that are highly favored and others that are not.” His three house cats disagree; they all leave whenever he plays. More than anything, Deming finds that playing the banjo is relaxing. Says Deming, “If I haven’t played the banjo for a few days, I know I’m working too hard. There is usually nothing I can do about it, but at least I’m aware.” Elizabeth M. Jarrell
NASA's Goddard Space Flight Center, Greenbelt, Md.
› Back To Top