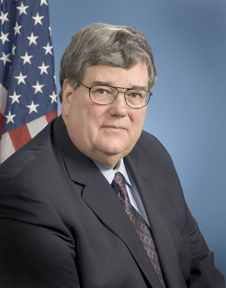 Goddard Deputy Director Rick Obenschain. Credit: NASA/Pat Izzo
> Larger image Arthur F. "Rick" Obenschain is the deputy director for Goddard Space Flight Center, a post he has held since August 2007. He shares with the deputy director for science and technology, Dr. Laurie Leshin, responsibility for executive leadership and overall direction and management of the center and its assigned programs and projects. He is also responsible for providing executive oversight and technical evaluation for the development, delivery for launch and operations of the space systems assigned to Goddard.

Before current Center Director Rob Strain was appointed on Aug. 4, 2008, Obenschain served as the acting director of the Goddard Space Flight Center. He was named to that position by NASA Administrator Michael Griffin in May 2008 after the previous center director, Dr. Ed Weiler, was named the associate administrator for the Science Mission Directorate.

Previously, Obenschain was appointed as the director of Flight Projects Directorate in September of 2004 and was responsible for the day-to-day management of the more than 40 space and Earth science missions in formulation or implementation at Goddard as well as the coordination of the Earth Science Technology Office.

Obenschain began his career with NASA at Goddard in the early 1960s as a summer engineering aide, accepting a full-time position in the power systems development area in 1966 upon his graduation. He has worked almost exclusively on hardware development projects since 1966, with emphasis in electrical systems. In 1982, after serving five years as a supervisor in the Goddard Engineering Directorate, Obenschain assumed the position of observatory manager for the Compton Gamma-Ray Observatory.

Obenschain was appointed to the position of project manager in September 1994 with the transfer of Landsat-7 from the Department of Defense. In December 1996, he was appointed project manager of the Earth Science Data and Information System (ESDIS) Project, a position he held until October 1998, when he assumed responsibility for the leadership of the Electrical Systems Center within AETD.

Obenschain was selected as the director of the Applied Engineering and Technology Directorate in June 2000, having previously served as the Deputy Director of AETD since October 1999.

Obenschain earned a Bachelor of Science in Electrical Engineering from the University of Maryland. He is the recipient of NASA's Distinguished Service Medal, Exceptional Service Medal, Outstanding Leadership Medal, Equal Opportunity Medal and Goddard's Award of Merit. He is the 1995 recipient of the American Institute of Aeronautics and Astronautics (AIAA) von Braun Award for Excellence in Space Program Management.
› Back To Top