To enable practical interstellar travel, here are THE 3 breakthroughs that we’ll need. These are the goals of the new NASA Breakthrough Propulsion Physics program:

What is a breakthrough? 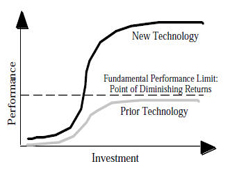 The S-Curve figure illustrates both the evolution of a given technology, and the breakthrough event when a new, superior technology becomes viable. For a given technology, the evolution is as follows: Initial efforts result in little advancement and then the technology becomes successful. This success point, at the lower knee of the curve, is where the technology has finally demonstrated its utility. After this point significant progress and improvements are made as several embodiments are produced and the technology becomes widely established. Eventually, however, the physical limits of the technology are reached, and continued effort results in little additional advancement. This evolution (effort expended versus performance gains) takes the form of an S-Curve. To go beyond the limits of the top of a predecessor’s S-Curve, a new alternative must be created. This new alternative will have its own S-curve and will eventually require yet another new approach to surpass its performance limits. The breakthrough event, is when the new method demonstrates its viability to exceed past the limits of its predecessor.

Paradoxically, it is at the point of diminishing returns of an existing technology when it is most difficult to consider alternatives. Institutions that grow up with a technology become too established, too uniquely adept at their technology to consider alternatives. Alternatives are outside their area of expertise. Established institutions prefer to modify, augment or find new applications for their technology rather than to search for ways to go beyond their technology. Historical evidence shows that this refinement approach does not guarantee sustained market superiority (Innovation, the Attacker’s Advantage, R. Foster, 1986). If an existing organization wants to avoid its own obsolescence, it must be willing to explore alternatives.

The work style of pioneering for alternatives is different than the style for building mastery. The main emphasis of day-to-day engineering is to be a master of your chosen technology. Mastery is achieved through continuous improvements; refining, augmenting and finding new applications while sustaining expertise throughout this process. The work style depends on established knowledge and tends to be systematic, relatively predictable, and has a relatively short-term return on investment. Creating new and superior technologies, however, is a wholly different type of work. Going beyond the limits of an existing technology requires a pioneering spirit. It requires imagination to envision future possibilities. Pioneering requires confronting ignorance and creating new knowledge rather than just apply existing knowledge. It requires intuition and subjective judgments to navigate in the absence of an established knowledge base. And because progress is unpredictable and the returns on investment are long-term, it requires the ability to take risks.

Use "Back" button to return to referring page.

Back to "Warp Drive, When?"