Grow Text SizeShrink Text Size
Metallic Foam Reduces Airplane Noise
Over the last century, airplanes have revolutionized society. It is possible to traverse the country, coast to coast, to visit far-away family in a matter of hours. We can cross the ocean, leaving at breakfast, and arrive in time for dinner in Paris thanks to airplanes. People and goods from across the globe can travel farther and faster than our great grandparents could have imagined.

For all the benefits of air travel, there are still a few areas of aviation that NASA and the aeronautics industry are continuously striving to improve. One of these important areas is noise reduction.

For people who live around airports, noise created by planes can cause a disturbance. At NASA centers across the country, new and innovative technologies are being researched and tested that can help reduce noise from planes. NASA's Glenn Research Center in Cleveland, Ohio is one of the centers helping new ideas take flight. 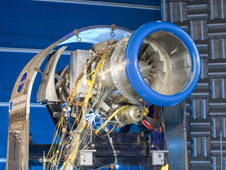 A test rig is assembled at NASA’s Glenn Research Center to evaluate the noise reduction of a newly-developed metallic foam liner. Image Credit: NASA Glenn researchers have been working with a metallic foam that is installed around an engine to reduce noise. The firm foam, crafted from stainless steel, looks like a tightly-compacted honeycomb made of silver metal, and feels uniform on the surface—gently abrasive, like a fine grained pumice stone. In the hand it feels lighter than expected for its size.

"This is an open cell foam which is mostly air. The foam is formed by ligaments—like a sponge that you use in your kitchen, except the ligaments are metal," says Cheryl Bowman, an engineer at Glenn.

NASA Glenn's noise reduction experiments with this foam got their start in an entirely different line of inquiry. Several years ago, Dr. Mohan Hebsur (Ohio Aerospace Institute) was working for the Materials Division in the Advanced Metallic Group at Glenn. As he was researching specific material systems for their ballistic impact resistance, he proposed using metallic foams as engine case liners. Through the course of his testing, he sent his foam to NASA's Langley Research Center in Hampton, Virginia, where they noticed something interesting about the metallic foam.

"Mohan started out focusing on one alloy for its good impact resistance but discovered an interesting acoustic benefit that was independent of metal type," Bowman says.

This is where Dan Sutliff got involved. Sutliff, a Glenn engineer and the NASA team lead for the project, has been partnering with Langley for a decade on researching aircraft noise reduction. They knew that open cell materials, like traditional foams, were effective in noise absorption, but they were too combustible for use on an engine. Sutliff and Mike Jones (Co-team lead) from Langley developed an experiment and fine-tuned the properties of the metallic foam. Partnering with Porvair Advanced Materials (a subsidiary of Selee Corporation) of Hendersonville, North Carolina, they created the metallic foam with exacting properties, including the pore sizes and density that were optimal for engine-generated noise frequencies. They then installed the Foam Metal Liner over the rotor of Glenn’'s Advanced Noise Control Fan, an 8-foot long, 4-foot in diameter test fan that is about the size of an aircraft engine. 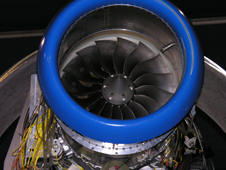 A jet engine, manufactured by Williams International, is custom fit with a metallic foam liner for testing. Image Credit: NASA "We found that the foam was very, very successful in reducing noise in that environment," Sutliff says. "It helped us determine it was worth pursuing in the 9 x 15 Wind Tunnel and on actual aircraft engines."

In 2006, Sutliff presented his findings at a conference. After the presentation, he was approached by personnel from Williams International of Walled Lake, Michigan—an airplane engine company that was interested in evaluating noise reduction concepts to continuously improve cabin noise quality. They wondered if the Metal Foam Liner could be tested on their engines.

"I took the back of a napkin and together we sketched out a test plan. Within those five minutes, we prepared for the next two years," Sutliff says.

This began a productive partnership, made possible through NASA's Partnership Seed Program and the Innovative Partnerships Program. The collaboration between NASA and Williams, part of a Space Act Agreement, resulted in the design, manufacture and testing of the metallic foam on an actual executive jet engine in 2008.

"Glenn had a lot of expertise, as well as the facilities in which to test. Williams had the engine and the hardware, and the manufacturing capability in their facility near Detroit," Sutliff says.

The undertaking also represented a collaboration between branches at Glenn. Bowman, a Co-team lead for the project from the Structures & Materials Division (Advanced Metallics Branch) and Sutliff, from the Acoustics Branch, each brought their specialized knowledge to the project. After extensive testing, the results proved favorable.

"We found out the foam was very successful—it reduced the engine noise significantly," Sutliff says. "Over most of the operating range of the engine, we saw a reduction of 4-5 decibels, or cutting the noise by more than half," Sutliff says.

The project, which recently received a Federal Laboratory Consortium Technology Transfer Excellence Award, isn’'t over yet. The team is hoping to continue working with Williams on refining the technology for their needs, as well as working with manufacturers who make larger engines.

"The hope is that it can be used in the commercial market to reduce engine noise effectively and without increasing the operating costs or the weight and without performance penalties. With more research and targeted design to different engines it could be successful," Sutliff says. "The long term goal is that all objectionable airplane noise remains within the boundary of the airport, leaving residential communities unaffected."