Fuel Cells: A Better Energy Source for Earth and Space
Producing power without damaging our environment is a continuing challenge. Fossil fuels like gasoline, coal, and jet fuel are not renewable, and burning these fuels increases air pollution and harms the enviroment. Batteries have limited lifetimes and need to be disposed of in hazardous-waste landfills. Many environmentally friendly alternatives (solar, wind, hydroelectric, and geothermal power) can only be used in particular environments. In contrast, fuel cells can have near-zero emissions, are quiet and efficient, and can work in any environment where the temperature is lower than the cell's operating temperature. 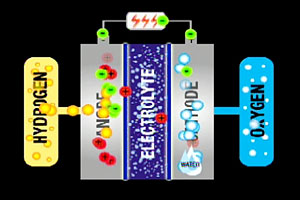 Image right: A fuel cell converts hydrogen and oxygen into water, producing electricity and heat in the process. It has two electrodes, the negative anode and positive cathode, separated by an electrolyte that only allows specific ion flows. Fuel is delivered to the anode and oxygen to the cathode. Credit: NASA

A fuel cell combines a fuel (hydrogen or hydrogen source) with an oxidizer (oxygen or air) to produce electrical power. These electrochemical devices work similar to batteries, but they never run down or need to be recharged. Like a battery, a fuel cell has two electrodes (a cathode and an anode) that are separated by an electrolyte. However, batteries have at least one solid metal electrode that is slowly consumed as electricity is produced. In a fuel cell, the electrode is not consumed, and the cell can produce electricity as long as more fuel and oxidizer are pumped through it.

Fuel cells can use hydrogen directly, or they can obtain hydrogen from another fuel, like liquid methanol (wood alcohol), which is renewable and can be transported more easily than hydrogen. With hydrogen fuel, heat and water are the only byproducts. With methanol fuel, heat and water are still the major byproducts, along with only a fraction of the carbon dioxide and none of the other pollutants produced by a gasoline-burning engine. 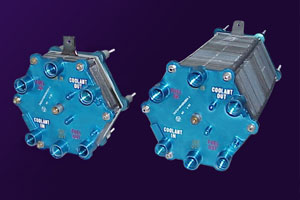 The NASA Glenn Research Center is the focal point for NASA's fuel cell research and development. Glenn helped to develop the alkaline fuel cells that are the primary source of power on the Space Shuttles and developed fuel cells for electric vehicles and energy-storage systems. Glenn researchers continue to look for ways to improve fuel cells.

These improved fuel cells may soon be seen in many areas of our lives. For example, fuel cells may soon provide auxiliary equipment power on commercial aircraft. They could be used in cars, commercial powerplants, and personal electronics. Glenn is developing and investigating fuel cells for emissions-free aircraft, the International Space Station, reusable launch vehicles, a Mars airplane, and a Space Shuttle upgrade, as well as for systems to produce electricity and store energy on the Moon and Mars. 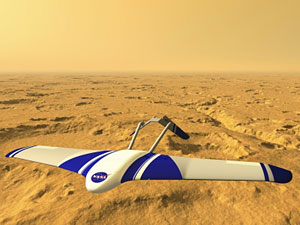 Image right: Proton-exchange-membrane fuel cell technology and next-generation fuel cell concepts are being explored for space vehicle applications, such as the Mars Flyer, and for aircraft power and propulsion systems. Credit: NASA

Alkaline fuel cells have been the primary source of electrical power on human spaceflight systems for over four decades. However, alkaline fuel cells use a costly, aging technology. Much work must still be done before improved fuel cells can be used in spacecraft, which operate at extreme altitudes and low temperatures for extended durations. This technology will enable new space exploration missions as well as fuel savings, quiet operation, and reduced emissions for aircraft.

In RFC systems, fuel cells use hydrogen and oxygen to produce electricity, water, and heat. Then a solar - powered electrolyzer breaks the water into hydrogen and oxygen so that the fuel cell can use it again. The waste heat is also used. RFC systems provide efficient, environmentally friendly, highly reliable, renewable energy conversion. Glenn researchers have developed RFC concepts for storing energy on the International Space Station, high-altitude balloons, and high-altitude aircraft. They are now investigating RFCs for storing energy on the Moon or Mars.

SOFCs are being considered for power generation and for use in space because of their high efficiency, high power density, and extremely low pollution. They have an all-solid construction and can operate at high temperatures--producing clean, efficient power from easy-to-transport fuels instead of pure hydrogen. SOFCs also are being developed for portable electronic devices, cars, and aircraft.

Because NASA SOFCs must operate at high temperatures (600 to 1000 °C) for thousands of hours in corrosive environments, Glenn researchers developed special sealing materials as well as a design that combines the separator and sealant. They also developed a novel process to make SOFC parts (anodes, cathodes, and cermets) that weigh less but provide support while correcting fuel-flow problems. Finally, they developed thinner, lighter, high-temperature interconnects that reduce the weight of the entire SOFC system.