Sailing on Sunbeams: Solar Power to Advance Interplanetary Travel
Imagine a vehicle that glides through space like a boat sails on water. Tacking a course from planet to planet, it burns no fuel and leaves behind no pollution. Such fantastic craft soon may be possible thanks to NASA research.

Over the next three months, NASA engineers and industry partners will test two 20-meter (66-foot) solar sail propulsion systems at the NASA Glenn Research Center's Space Power Facility at Plum Brook Station in Sandusky, Ohio. These tests are important milestones in the development of state-of-the-art propulsion technology that will use the Sun's energy for future robotic space missions. 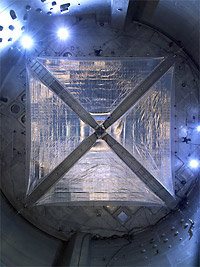 A solar sail is an enormous structure made of lightweight reflective material 40-to-100 times thinner than a piece of writing paper. When deployed, the sail looks similar to a kite and is supported by a lightweight, rigid framework called a boom. Streams of solar energy particles, or photons, bounce off the sail propelling it through space, just like the wind pushes a sailboat across water.

On Earth, we cannot feel the gentle force of photons constantly striking us. Compared to the forces of gravity and air, it is unnoticeable. But in the vacuum of space, the continuous photon pressure provides enough thrust for a space vehicle to hover in place or change its plane of orbit, maneuvers that would require too much propellant in conventional rocket systems. 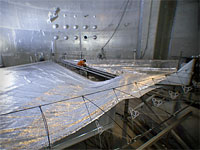 A team of engineers from Marshall, Glenn and the two firms are testing the solar sails' strength, stiffness and behavior to see which design performs better and what improvements must be made before flight. These tests require a simulated space environment big enough to accommodate the vast, delicate sails.

Built in 1969 to test nuclear-powered spacecraft, the Space Power Facility is the world's largest vacuum chamber. The rotund structure measures 100 feet in diameter and towers at 122 feet high.

"The second largest vacuum chamber is only one-quarter the volume of this one," said Facility Manager Jerry Carek.

A steel liner and an 8-foot thick wall protect the aluminum chamber and keep air from seeping in during tests. To prevent damage, researchers must pull 160 tons of air out of the chamber at a slow, deliberate pace. The entire process, from closing the chamber walls to deploying the sails in the space environment, takes as many as 10 hours. Researchers will study each sail system for up to 30 days.

The sails eventually could lead to missions to study the sun and its heliosphere, the magnetized bubble of plasma around it. Such missions are impossible using today's space vehicles.

"This is a technology whose time has come," said Les Johnson, manager of Marshall's In-Space Propulsion Technology Office. "Studying the solar system is part of the Vision for Space Exploration, and robotic missions often come before human missions. Countries around the world are looking at solar sails, and NASA wants to make them happen."