What is Microgravity?
Gravity is a force that governs motion throughout the universe. It holds us to the ground, and it keeps the moon in orbit around Earth and Earth in orbit around the sun. 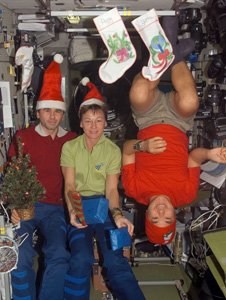 The Expedition 16 crew members pose for a Christmas photo in the Zvezda Service Module of the International Space Station. Credit: NASA Many people mistakenly think that gravity does not exist in space. However, typical orbital altitudes for human spaceflight vary between 120 - 360 miles above Earth's surface. The gravitational field is still quite strong in these regions, since this is only about 1.8 percent the distance to the moon. Earth's gravitational field at about 250 miles above the surface is 88.8 percent of its strength at the surface. Therefore, orbiting spacecraft, like the space shuttle or space station, are kept in orbit around Earth by gravity.

The nature of gravity was first described by Sir Isaac Newton, more than 300 years ago. Gravity is the attraction between any two masses, most apparent when one mass is very large (like Earth). The acceleration of an object toward the ground caused by gravity alone, near the surface of Earth, is called "normal gravity," or 1g. This acceleration is equal to 32.2 ft/sec2 (9.8 m/sec2).

If you drop an apple on Earth, it falls at 1g. If an astronaut on the space station drops an apple, it falls too. It just doesn't look like it's falling. That's because they're all falling together: the apple, the astronaut and the station. But they're not falling towards Earth, they're falling around it. Because they're all falling at the same rate, objects inside of the station appear to float in a state we call "zero gravity" (0g), or more accurately microgravity (1x10-6 g.)

The condition of microgravity comes about whenever an object is in free fall. That is, it falls faster and faster, accelerating with exactly the acceleration due to gravity (1g). As soon as you drop something (like an apple) it is in a state of free fall. The same is true if you throw something; it immediately starts falling towards Earth. But how does something fall around Earth?

Newton developed a thought experiment to demonstrate this concept. Imagine placing a cannon at the top of a very tall mountain.

Once fired, a cannonball falls to Earth. The greater the speed, the farther it will travel before landing. If fired with the proper speed, the cannonball would achieve a state of continuous free-fall around Earth, which we call orbit. The same principle applies to the space shuttle or space station. While objects inside them appear to be floating and motionless, they are actually traveling at the same orbital speed as their spacecraft: 17,500 miles per hour (28,000 km per hour)!

Objects in a state of free fall or orbit are said to be weightless. The object's mass is the same, but it would register "0" on a scale. Weight varies depending on whether you are on Earth, the moon or in orbit. But your mass stays the same, unless you go on a diet!

NASA uses a variety of facilities to create microgravity conditions. The most famous way is by aircraft flying in parabolic arcs to create microgravity for tests and simulations that last 20-25 seconds. NASA's Johnson Space Center, for example, operates a C-9 Low-G Flight Research aircraft also known as the "Vomit Comet." It make several trips each year to NASA Glenn in support of ground-based microgravity research. It's predecessor, a KC-135 aircraft, was used to shoot the weightless scenes in the movie Apollo 13.

The facilities most likely to be misconstrued as "anti-gravity chambers" are NASA's drop towers. Specifically, NASA Glenn has the Zero Gravity Research Facility. It is a large shaft some 500 feet deep that allows test packages to free fall in a vacuum for just over 5 seconds. In this state of free fall, weightlessness (at or near microgravity) can be obtained. NASA Glenn also has a 2.2 second drop tower.