Medical Illustration: Where Art Meets Science
When Nick Hawes applied for an internship, he wasn't looking for ordinary experience. He wanted to push the boundaries of his field.

As a medical illustration major at the Cleveland Institute of Art, Hawes specialized in drawing and designing visual representations of medical and biological information. While most of his fellow students were looking for internships with hospitals or textbook publishers, he had something else in mind.

"I wanted to see where else medical illustration could apply besides health care," he said. 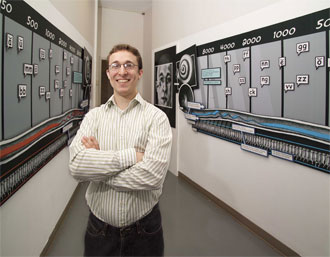 He found the answer at the NASA Glenn Research Center. During the summer of 2003 and 2004, Hawes participated in the center's internship program by supporting the Acoustical Testing Laboratory.

Image right: At the Cleveland Institute of Art, Hawes stands beside a mural that shows how excess noise can damage the inner ear causing hearing loss.

This lab provides sound testing for spaceflight hardware and science experiments that must meet stringent acoustical requirements before flying on the space shuttle or international space station. According to the lab's manager, Beth Cooper, space station-bound equipment is designed to be quiet, because so many pieces of equipment are housed within the small spaces where the astronauts live and work.

Although some equipment may be as unobtrusive as the cooling fan in a personal computer, imagine living in a room in which every surface was covered with racks of noise-producing equipment containing cooling fans, small motors, pumps and computer hard drives.

"The astronauts are on the station 24 hours a day. They have to live there, eat there, sleep, relax, exercise, and, of course, do the work of operating complex science experiments there," said Cooper.

"We're not just trying to prevent hearing loss -- we're maintaining an environment that allows clear speech communications, where the astronauts can work without being distracted by noise and can hear signals and alarms," she continued. "It's also important that the noise doesn't make them tired or irritated."

In addition to providing acoustical testing and consulting, the lab's staff produces training resources for engineers, astronauts and flight surgeons. That's where Hawes' skills were most valuable.

"It's important for people who are building experiments and hardware not only to understand the acoustics requirements, but also to understand why they exist," said Cooper. "We needed a medically trained artist to help us demonstrate that."

As part of his senior thesis, Hawes developed a mural that shows the effects of noise-induced hearing loss on the inner ear. It now hangs on the wall at NASA's Johnson Space Center as an aid in hearing conservation training for flight crews and flight surgeons. 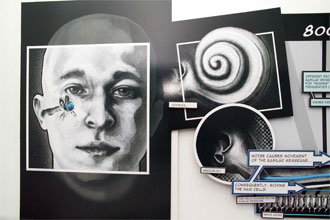 The mural's striking resemblance to the artist is no coincidence. It's a self-portrait without the brown locks. "I didn't think hair served any purpose in the illustration," Hawes said. "And I wanted to see what I'd look like bald."

Aside from embracing his hair as an asset, Hawes also developed an appreciation for the ins and outs of auditory health.

"Beth was a great mentor," he said. "I learned about acoustics, auditory anatomy and pathology and noise control. I suspected that the field would be more complicated than I ever imagined, but I didn't realize how much of engineering and everyday life it touched."

Hawes' unique combination of skills also intrigued Glenn's Imaging Technology Center, which provides photography, video, audiovisual, and digital and scientific imaging support to NASA. They offered him the opportunity to learn new skills by working alongside their staff on large high-tech projects.

Like any internship should, the artist's experience at Glenn helped him develop marketable professional skills and set the stage for an early career opportunity. Having earned his degree, he now supports the lab as a freelance illustrator.