Grow Text SizeShrink Text Size
Astronauts Test Glenn Exercise Harnesses
Imagine that you want to exercise on a treadmill. You step onto the machine and select your desired speed. As the belt starts moving, you start walking and eventually running. Your feet rhythmically hit the belt, and you get a nice workout.

In space, it isn't that simple. 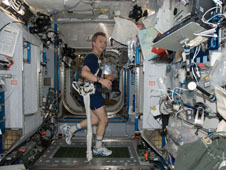 Bob Thirsk (Canadian Space Agency) exercises with the Glenn Harness aboard the International Space Station during ISS Expedition 20/21. Image Credit: NASA
For astronauts living in space, like those who reside on the International Space Station, getting a good workout is equally -- and in some ways even more important -- than for earthbound people.

"Crew members exercise for a host of important reasons. There's a psychological benefit to exercise, and crew members work out to combat spaceflight deconditioning -- to help fend off the bone loss that they experience in microgravity and to help maintain muscle strength and cardiovascular endurance. All of these things are adversely affected by long-duration space flight," says Gail Perusek, Manager for Exercise Physiology and Countermeasures Project at NASA's Glenn Research Center.

Like your local gym, the space station has a variety of exercise equipment. The exercise complement includes a resistance device, a cycle ergometer and two treadmills.

The two different types of treadmills on the space station are the Treadmill with Vibration Isolation System (TVIS) and the newly-installed Combined Operational Load Bearing External Resistance Treadmill (COLBERT), named after comedian Stephen Colbert. They're different in many ways, but both treadmills share the need for an exercise harness. Astronauts must use a harness to attach themselves to the treadmill while running in space due to the lack of gravity. The harness prevents them from floating off the machine, provides friction against the treadmill belt as they run and exerts an external load, or force, on their body to simulate the resistance of gravity that a terrestrial workout would naturally provide.

The current harness, which has been in use for several years, has some drawbacks. It isn't comfortable and has limited adjustability. Some crew members have reported chafing, as well as pain in their hips and shoulders from using the harness. As a result, the astronauts are not loading their bodies to the optimal amount needed to maintain muscle and bone health. The thinking is, the more load applied to an astronaut while running (ideally the equivalent of their full body weight on Earth) the better the workout; it increases the health benefits and decreases health risks.

"Bone loss occurs at a more rapid rate in space than it does on Earth," Perusek says. "In space, astronauts don't get nearly the same amount or quality of repetitive loading as we do here on Earth, and bone mineral density loss occurs when the skeleton is unloaded."

The need for a new treadmill harness that is more comfortable and effective inspired the development of a new harness by NASA's Glenn Research Center. This effort, undertaken in collaboration with the Cleveland Clinic and funded by the Human Research Program at NASA's Johnson Space Center in Houston, Texas, resulted in the creation of a new harness design called the Glenn Harness. The team also developed custom instrumentation to measure the loads on the harness during exercise. Two Glenn Harnesses are currently being tested by space station crew members on orbit, in a study called the Harness Station Development Test Objective, or Harness SDTO. Additional harnesses will soon be tested on the station by different crewmembers. 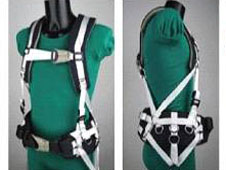 The Glenn Harness incorporates technology from the world of backpacking, with shoulder straps and a hip belt distributing load. Image Credit: NASA Four years ago, the team from the NASA Glenn, ZIN Technologies of Middleburg Heights, Ohio and the Cleveland Clinic began work on their re-imagined harness. They realized that the treadmill harness operates much like a backpack, with shoulder straps and a hip belt distributing load. The team travelled to Colorado to consult with backpack companies, such as Osprey and Kelty. Upon their return, the team designed and created prototypes of the new harnesses (initial prototypes were actually crafted from disassembled backpack components) and began testing.

"At Glenn, we have an Enhanced Zero-gravity Locomotion Simulator (eZLS) where we can simulate zero-g treadmill exercise with human subjects," Perusek says. "We tested the prototypes with our treadmill and determined that indeed the harness was more comfortable than the current harness in a side-by-side comparison on the eZLS, and was able to distribute loads more evenly."

The team also sought extensive input from former space station crew members regarding the new harness. The idea to use antimicrobial fabric (containing silver ions) for the harness, for example, came from an astronaut who commented on the amount of sweat the harness must endure without a lot of washing.

After all of the research, designing and testing, the team worked with Terrazign, Inc. of Portland Oregon, to create the finished flight harnesses. The flight harnesses were shipped to Johnson Space Center in the spring of 2009, and packaged with additional equipment from Johnson to capture the load data. The first harnesses were blasted into space in September 2009.

The crew members participating in the study will use and evaluate the new and existing harnesses, and will complete questionnaires after each session to provide qualitative comfort data. The team also designed special sensors, called buckle transducers, which will measure the amount of tension in the harness straps and external loading each astronaut uses during their workout.

Once the crewmembers have returned to Earth, they will share their experiences with Perusek and her team during the crew debriefing process. If the feedback proves favorable, the hope is to incorporate the new harness as part of the standard crew exercise equipment.

The in-flight study is expected to continue through November 2010 on Expedition 24, and encompass the results from up to seven participating crewmembers.

"Working on a project that has the potential to positively affect crew members so directly is very rewarding. A lot of great effort has gone into this, and we're very hopeful that it will be of benefit for the crew," Perusek says. "As long as we have a manned presence in space, humans will be exercising in zero gravity or even partial gravity, like on the moon, and we'll need comfortable harnessing systems."