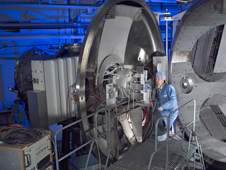 Caption: A NASA Glenn engineer performs verification tests of the imaging diagnostic suite that allowed for periodic assessment of the components on the NEXT engine during it's multi-year test. After the final check of all the systems, the vacuum door was closed in June 2005 and has not been opened since. Credit: Courtesy NASA 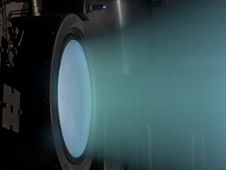 The NEXT ion thruster has been operated for over 48,000 hours, which for rocket scientists means that the thruster has processed over 770 kilograms of xenon propellant and can provide 30 million-newton-seconds of total impulse to the spacecraft. This demonstrated performance permits future science spacecraft to travel to varied destinations, such as extended tours of multi-asteroids, comets, and outer planets and their moons.

Available in a variety of sizes at: http://www.nasa.gov/centers/glenn/multimedia/imagegallery/if_89_ionthruster.html