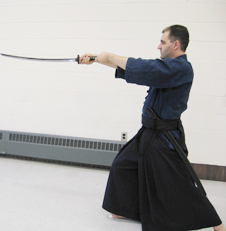 Pavloski works out with the Katana sword during the period devoted to Iaido training. 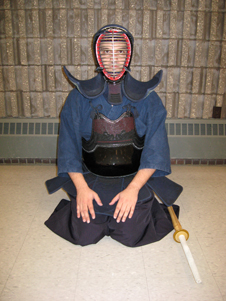 Pavloski Exercises with an Edge

"Kendo involves using a bamboo sword, called a Shinai, which was devised by early Japanese fencing schools to safely teach their warriors the most effective techniques of combat. The Shinai is still used in modern day competition," said Pavloski, an SGT, Inc. employee who serves as senior server administrator for the Logistics and Technical Information Division. "Iaido, the noncombat art of the Samurai, compliments Kendo by stressing perfect and elegant control of the body while using the Katana sword."

"I was never really into sports before, but Kendo speaks to me on many levels: it's a great physical outlet, requires strategy, can be easily practiced on your own and offers the cultural value of a very ancient Japanese training," Pavloski said. "Armor is worn during training or competition that must be adorned in a specific order and laced perfectly. The helmet is painted blood-red inside "to hide the fear in your face" before you go into battle. From the moment I begin the ritual of getting into my armor, until the moment I spring into action, is such an adrenaline rush."

Since joining the Kiraly Fencing Academy six months ago, Pavloski's regimen and zeal for the sport have helped him progress up a rank. Although defeated in the early rounds of a recent competition by a female opponent, neither Pavloski's pride nor his zeal was deflated.

"I experienced firsthand what I've learned early on about fencing -- it's dominated by skill not strength, so women can do as well as men," Pavloski said. "It took only one bout with her to realize the quality of the strikes versus the quantity is what determines a winner."