Center is Rich with Technological Challenges for Dr. Okojie

Dr. Robert Okojie, a researcher in the Sensors and Electronics Branch, is a testament to the quality of a research environment that nurtures talent and ability at NASA Glenn. 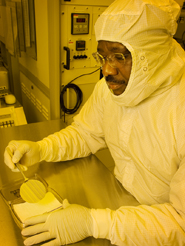 While Okojie is excited about the recent licensing of three patents to the Endevco Corporation, the world's leading designer and manufacturer of dynamic instrumentation for vibration, shock and pressure measurement, he is proud of the fact that he now enjoys the success of having five patents in practice. Okojie currently holds 12 patents with 2 more pending. His research is largely focused on high-temperature microelectromechanical systems (MEMS) technology.

The potential for licensing my other patents is always there, but they are largely driven by market forces," Okojie explained. "However, several of the patents that culminated from my research have direct impact on NASA missions even if they are not currently commercially viable."

A descendant of royalty from Nigeria, Okojie came to the United States in 1986 to attend college. After a brief stint at Essex County College, Newark, N.J., he attended the New Jersey Institute of Technology, also in Newark, where he obtained his bachelor's and master's in Electrical Engineering in 1991 and 1993, respectively. He, continued, and later earned a doctorate in philosophy in 1996. His grandfather, King Ogbidi Okojie of Uromi, Nigeria, was an ardent supporter of higher education.

"The opportunity to work at Glenn has been a rewarding and exciting experience for me," Okojie said. "The environment at this center is rich with technical challenges, and thus is a fertile ground that unleashes one's creativity that usually leads to innovations and emerging technologies."

While Okojie has achieved a type of technical celebrity status with his colleagues, after work he is just a regular dad who spends time with his family.

"My work is very rewarding, but my life would never be full if it were not for my family," he said. "Watching my boys play sports, going to the movies, bike riding and summer vacations with my family make me realize how truly fortunate I am."