Back in the 1970s, Dr. Joseph Savino eagerly tackled a task from NASA and the National Science Foundation to prepare a feasibility study on wind turbine technology as an alternative power-generating industry. The results generated sufficient interest that led to the U.S. hosting a Wind Energy Workshop, which drew worldwide interest. Now, at 76, the NASA retiree feels obliged to be an advocate for the advancement of wind energy as a growth industry in Northeast Ohio.

"Very little literature was available on wind turbines then, but the Glenn Library was indispensable in aiding my research," Savino recalls. "The outcome was key to the center leading the U.S. Wind Energy Program from 1973 to 1985 for large horizontal-axis wind turbines, the most popular systems in use today."

While there have been many technologies adopted from that era for energy application, Savino is convinced still more exist across the agency that have yet to be introduced to the current market. Savino contacted his protégée, Dr. Larry Viterna, to mount support from NASA to help make wind energy a significant part of Ohio's electricity portfolio. 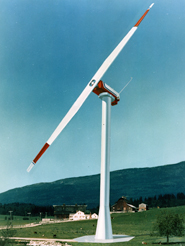 Image left: A MOD-2 Turbine, one of the 13 experimental turbines, funded by the NSF and Department of Energy, that were put in operation between 1975 and 1979.

Viterna, who is currently Glenn's lead for Strategy and Business Development, shared an office with Savino and led the Wind Energy Program Office's aerodynamics team from 1978 to 1981.

"Joe is the catalyst for NASA meeting and consulting with regional leaders to promote wind energy as a viable industry for Ohio. He has been an inspiration to me and key to my involvement, as well as the center's," Viterna said. "It wasn't until he contacted me last year that I became motivated and later made a chance discovery that a model I coauthored for predicting wind turbine power had become a standard universally."

Savino's contributions to wind energy and other notable efforts over his 41 years of service to NASA will be recognized next month during a ceremony for the Outstanding Mechanical Engineer Award presented by Purdue University's School of Mechanical Engineering in West Lafayette, Indiana. He is one of seven recipients who have demonstrated exemplary accomplishments and leadership in industry, academia and government service.

Savino earned three mechanical engineering degrees from Purdue University -- a bachelor's in 1952, a master's in 1953, and a doctor of philosophy in 1955 -- before joining the staff at NACA/NASA in the summer of 1955.

Not resting on his laurels, Savino remains alert and ready to lend his wisdom and expertise when requested. He finds great delight in volunteering in his community, and consulting or lecturing in other areas of interest such as cycling safety and team building/workforce relations.

"My mind never turns off," Savino said. "Very few people have a chance to make 'a world of difference' and I hope to live to be 100."