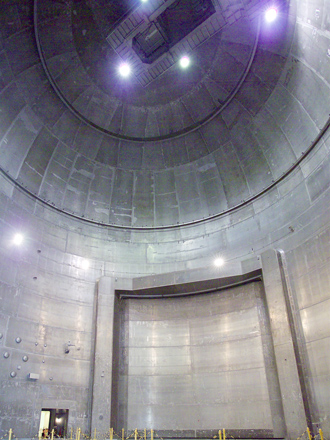 Agency management, top-level elected officials and community stakeholders joined NASA Glenn in recognizing the role this illustrious facility, located at Plum Brook Station in Sandusky, will play in the country's next phase of space exploration. The facility will host integrated environmental testing of Orion, the crew exploration vehicle being designed to carry humans to the moon.

"This dedication is a significant milestone for returning back to the moon and onto Mars," said Glenn's Director of Space Flight Systems, Robert Moorehead. He explained that modifications are under way in the facility to enable tests that will simulate environmental conditions such as those experienced during launch, in-orbit operations and atmospheric reentry. The tests will demonstrate the ability of the Orion hardware to meet specified performance requirements. The SPF staff will test thermal, acoustic, mechanical vibration and electromagnetic compatibility testing on the fully assembled spacecraft -- the launch abort system, crew module, service module and spacecraft adapter.

During the rededication, Center Director Whitlow recognized members of the Glenn team for their "hard work and dedication." This team created the proposal -- selected by the Crew Exploration Vehicle Project Office -- to conduct the integrated environmental testing at PBS. NASA Glenn awarded each team member with a certificate of appreciation.

Skip Hatfield, Orion CEV project manager, NASA Johnson, also applauded the team, and affirmed the value of the SPF in helping to achieve the Vision for Space Exploration. 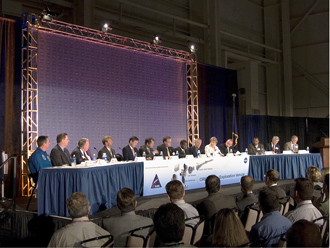 "Of all the economic development projects we will work on, none will be more transformational than the one we announce and celebrate today," stated Lieutenant Governor Fisher.

The rededication culminated with an Orion test sequence animation video of the SPF, which was produced by Glenn's Imaging Technology Center Video and Multimedia Group in the Logistics and Technical Information Division. A reception within the assembly area enabled guests to experience the magnitude of the 122-foot high facility.

By Doreen B. Zudell
› Back To Top