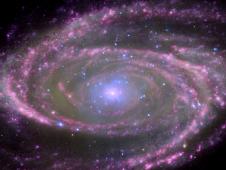 This image of a supermassive black hole in spiral galaxy M81 is the subject of one child's poem.
› See Poem › View Images and Poems

The girls were instructed to review NASA's interactive timeline and then select an inspiring image from the timeline or another NASA image gallery. After choosing an image, each scout wrote a poem consisting of three short lines, similar to a haiku.

"My hope was that they would learn a little about NASA," said aerospace engineer Dennis Stocker, who created the exercise for the scouts. Stocker coordinates NASA Glenn Research Center's partnership with the Girl Scouts of North East Ohio.

"Women are underrepresented in the fields of science, technology and engineering," he said. "Ultimately, our goal is that some of the girls might consider futures in these fields."

In the meantime, the young women who participated in this exercise learned something about NASA's work and used it to inspire their own creativity.

"We had so much fun with this project," said troop leader Joyce McBriarty of Illinois. "The girls are so very proud of their poems. Our school is so excited that they have them all displayed in the glass case."