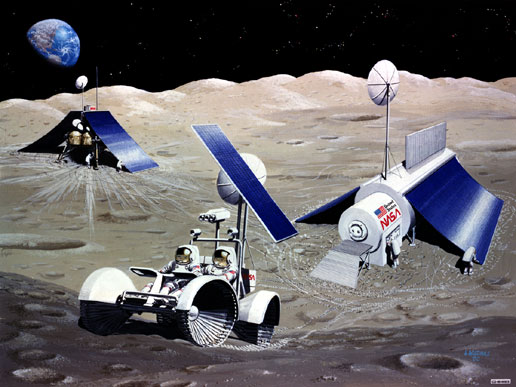 This artist's concept shows the deployment of solar arrays, which convert sunlight into electricity, on an initial lunar camp of the future. Immediately after landing, two large flexible solar arrays are rolled out "window-shade" fashion from the lander. One panel is tilted toward the eastern horizon, while the other faces west. This allows the array to produce power during the entire two-week stay without tracking the Sun. These arrays provide power while the astronauts scout the area and prepare the base. Later, the astronauts will set up a larger, Sun-tracking array to provide higher power levels. For exploration, surveying, and lunar prospecting, the astronauts can drive around in a battery-powered moon buggy. The buggy will have its own small solar array, which tops off the battery charge whenever the rover is parked.