Grow Text SizeShrink Text Size
New Assignments, New Responsibilities Proposed for Glenn
NASA recently announced its new planned course for the future when it outlined the proposed budget for fiscal year 2011. This initiative intends to further human space exploration, develop technologies and relationships with industry and deepen our understanding of our planet. If the budget is approved by the U.S. Congress, all ten of the NASA centers will see their roles changing and evolving. NASA's Glenn Research Center in Cleveland is poised to become an even more integral factor in the equation for NASA's ongoing success. Glenn will become the home of two new program offices that will serve and interact with the entire agency. 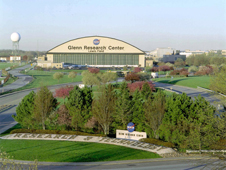 NASA's Glenn Research Center in Cleveland, Ohio will continue to play an essential role in NASA's success under the proposed budget. It will manage two agency-wide program offices and see an increase in its budget for certain programs, including Aeronautics.
Image Credit: NASA Evolving Change

Glenn will be responsible for the Exploration Technology Development and Demonstration (ETDD) Office and the Space Technology Research Grants Program Office. Ray Lugo, acting director at Glenn, says that this is a testament to the trust the agency has in Glenn. Glenn will have an important leadership role with other centers and with the aerospace industry.

"The best part of the proposed new changes is that we will have higher visibility, both within the agency and externally," Lugo says. "We have assignments that align very well with what our competencies here at Glenn are, and more importantly, it really demonstrates a visible show of confidence in NASA Glenn's ability to lead programs for the agency."

The programmatic changes at Glenn mean that some current programs will likely be discontinued, while new programs take their place. Lugo is excited about what the addition of new programs mean for the Glenn community.

The Exploration Technology Development and Demonstration (ETDD) Office will coordinate and manage the research into technologies which will enable space exploration. ETDD will focus on projects like high-power electric propulsion, autonomous precisions landing, in-situ resource utilization, human-robotic systems and fission surface power systems. The office will usher these technologies from their earliest stages of laboratory development, through ground and flight testing and towards becoming ready-to-use products. The proposed budget for maturing these exploration technologies is $223 million in fiscal year 2011 and $1.8 billion over five years.

"These areas are enabling technologies, or building block technologies, that we need to extend our current state of the art technology, if we want to be able to do missions beyond low Earth orbit," Lugo says. "We'll be investing in technologies that we will need to go to Mars." 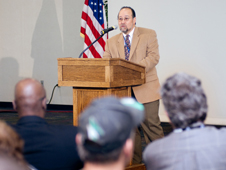 Ray Lugo, the acting center director at Glenn, speaks with employees about upcoming changes at an all-hands meeting at Glenn's Plum Brook Station.
Image Credit: NASA Glenn has already been working on developing technology that would fall under the purview of this office. One such program, the Next Evolutionary Xenon Thruster (NEXT), hasn't been flight tested yet. This program will enable Glenn to take these technologies, and technologies not yet developed, through the flight demonstration phase.

"I see ETDD as a really exciting thing for NASA Glenn, because throughout our history we have been a research and technology organization," Lugo says. "It is really well aligned to what we do here at Glenn—we've worked on these technologies for years. I'm really happy we were given this assignment."

Faculty members from universities across the country can apply for grants up to $400,000 to enable them to work on technologies that can eventually be used in human space flight systems. This funding source will allow academics to pursue innovative ideas that they otherwise may not have been able to investigate.

The student component, The Space Technology Research Grants Program Office, will provide 500 students from across the country with grants up to $60,000. This program would engage students while providing irreplaceable real-life educational experiences and opportunities to make notable scientific contributions.

"We're doing something we haven't done for years in this country, which is to provide a source of funding for people to get out-of-the-box ideas developed to a level where we can potentially implement them in a space mission and solve some difficult problems," Lugo says. 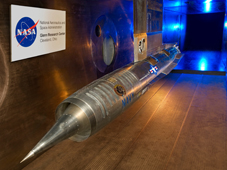 Many partnerships with industry and academia will be managed by the Space Technology Research Grants Program Office, which will be based at Glenn under the new proposal. Pictured is the Glenn 10 x 10 Supersonic Wind Tunnel, testing a missile that is part of the Revolutionary Approach to Time Critical Long Range Strike Project (RATTLRS) with the Massachusetts Institute of Technology (MIT).
Image Credit: NASA Aeronautics research, a specialty of Glenn since its founding in 1941, will receive additional funding, pending approval. Research activities in green aviation and the Next Generation Air Transportation System (NextGen) will be even greater priorities under this plan. Glenn will support the Integrated Systems Research Program, which looks into unmanned aircraft in the national airspace, as well as NASA's Environmentally Responsible Aviation Project.

"We'll be looking at the next generation of engines… at reducing noise and improving the fuel consumption of aircraft engines, and things like biofuels," Lugo says.

This expansion builds on Glenn's expertise in aeronautical research.

If adopted, the new budget could benefit Ohio in multiple ways—from increasing NASA collaborations with local businesses to growing the Glenn work force. The recruitment of new workers, which has been ongoing for the past two years, would continue or increase under the new plan.

"Between what we've done in obtaining these programmatic assignments, and what our community partners are doing with advocating for NASA, I think there is the potential for an increased economic impact," Lugo says.

The proposed new budget stands to positively affect the Glenn community, the agency and the Northeast Ohio region.

"We have a good opportunity to be a significant player in all the agency's programs… we have the opportunity to solve hard problems," Lugo says. "Glenn can become the supplier of solutions to the rest the agency."