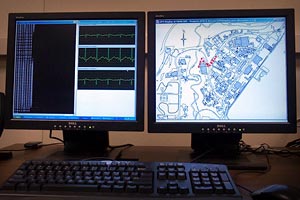 Evidence suggests that astronauts have experienced slight variations in heart rhythms during missions. Called cardiac arrhythmias, severe episodes can cause fainting and even sudden cardiac death when left untreated.

Before NASA sends humans farther into space, researchers want to know how cardiac arrhythmias could affect an astronaut's health. To find out, a team of doctors and engineers developed an improved method to monitor astronauts' hearts.

In the proposed system, a heart monitor using an advanced electrocardiogram (EKG) developed by MetroHealth Medical Center detects subtle variations in the heart's rhythm. NASA Glenn's Embedded Web Technology would send signals from the EKG to flight surgeons on the ground via the Internet.

In addition to enhancing the study of astronaut health, the technology may also improve health care for thousands of people every year. Engineers have developed a ground version of the monitor that includes a global positioning system. It will allow medical professionals to monitor outpatients with arrhythmia symptoms in real time and locate the patient in an emergency.