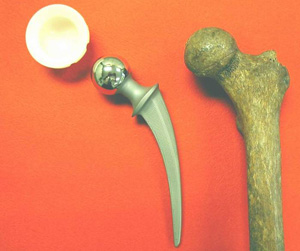 Atomic oxygen, or oxygen broken into individual atoms by sunlight, doesn't typically exist on Earth. In low Earth orbit, however, these single oxygen atoms are abundant, and they can rapidly corrode NASA's satellites and spacecraft.

While developing a method to test materials for their durability in space, NASA Glenn researchers discovered that atomic oxygen also removes biological contaminants from surfaces. This makes it ideal for cleaning surgical implants, which are often contaminated with fragments of bacteria cells even after sterilization. These contaminants can cause patients pain and inflammation and may lead to implant failure. Unlike sterilization, atomic oxygen actually removes the remains of dead and fragmented cells by reacting with them to produce gas as the only bi-product.