Grow Text SizeShrink Text Size
To the Moon
Within the next 20 years, NASA will send astronauts back to the moon, but the mission will be very different from Apollo. This time, we're going to build a permanent lunar base, where we'll conduct scientific research, learn to use the moon's raw materials, and test new technologies for future missions to Mars and beyond. 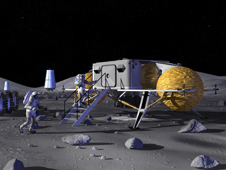 NASA employees and contractors around the country are hard at work designing and developing the Orion crew capsule, the lunar lander, and the Ares rockets that will carry the astronauts and cargo for these missions. At NASA's Glenn Research Center, the Space Flight Systems Directorate oversees this work.

On their journey to the moon, future astronauts will ride aboard the Orion crew exploration vehicle. Orion consists of three major components: a crew capsule; a service module to provide power, propulsion, cooling, air and water; and an adapter to connect the service module to the Ares rocket. Glenn manages the contractor work package for the Orion service module and oversees integration of the spacecraft adapter.

Orion will launch into orbit atop the Ares I rocket, which will use one solid rocket booster for the first stage and a liquid oxygen/liquid hydrogen engine for the second stage. Glenn engineers and technicians are building a simulated upper stage for the first test rocket launch of the program, Ares I-X. Scheduled for 2009, the launch will test the Ares I booster. Glenn also is designing and developing several Ares I upper stage systems.

The heavy lifter of NASA's new spacecraft fleet is the Ares V rocket. It will launch the lunar lander and other cargo into Earth's orbit, where they will mate with Orion. From there, the Ares V Earth Departure Stage will haul Orion and the lander to the moon. Glenn is leading the development of the Ares V rocket's power system, steering system and protective payload shroud.

The center also is working on new and improved power, electronics, communications equipment and information systems for future spacesuits. It is involved in developing the take-off and landing systems for the lunar lander, as well its power and energy storage systems. And it is responsible for leading the systems engineering and integration for all power systems in the program.