Grow Text SizeShrink Text Size
Glenn Helps Ares I-X Soar
The future of new rocket design was successfully tested when the Ares I-X blasted off on October 28, 2009. The test vehicle launched from NASA’s Kennedy Space Center and travelled for six minutes until it splashed down 150 miles away in the Atlantic Ocean. Ares I-X, at 327 feet tall and 1.8 million pounds, was comprised of components fabricated at several NASA centers. The Upper Stage Simulator (USS), all 430,000 pounds and 110 feet of it, was developed, designed and constructed at NASA’s Glenn Research Center. 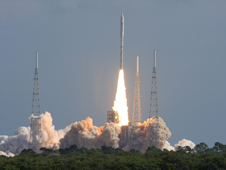 How did the launch go?
Vince Bilardo: The launch was nearly flawless! Once we got past the weather issues, the countdown and flight went just as planned. The vehicle flew the exact trajectory that was planned. All the data was successfully telemetered to the ground during the flight, the cameras all worked great and provided spectacular images of the flight. We proved conclusively that we can successfully control a tall, slender rocket by small movements in a single rocket nozzle.

How did the Glenn component, the USS, perform?
VB: The Glenn-built Upper Stage Simulator (USS) performed flawlessly, as best as we can determine so far. And that was not just during launch but in all phases of the ground assembly and launch processing prior to the flight. Contrary to speculation, the USS motion after First Stage separation was predicted in several of the “dispersion cases” or simulations that we ran prior to flight. And the entire stage held together after separation all the way down to the water, contrary to some analyses which predicted that it might break apart due to high loads during the tumble down to the sea. It all adds up to a strong endorsement of the robust design and manufacturing concept that our in-house team implemented. 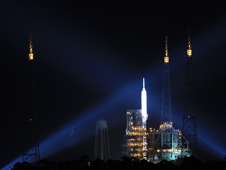 Ares I-X, including the Upper Stage Simulator (USS) built at NASA’s Glenn Research Center, is illuminated the night before launch. Image Credit: Thilo Kranz, Deutsches Zentrum fur Luft-und Raumhahrt (German Space Agency)
What was the experience of being at the launch like?
VB: I was part of the Launch Support Team, which was located in one of the backup launch control rooms called Hangar AE, on the Cape Canaveral Air Force Station side. All of the Integrated Product Team personnel that designed and developed the Ares I-X hardware and software were located in Hangar AE. We had to be “on station” at our consoles by 4:00 am for the countdown each of the two launch attempts on October 27 and 28. Then, we had to work some contingency loads analyses to take into account the winds on the actual day of launch and their potential affect on the vehicle structure. So it was a very busy time leading up to the final countdown coming out of the planned hold at the T-4 minute point.

As we got close to this point, the weather uncertainty took over, and it made for an emotional roller coaster as we thought we had a go, then the weather window would close, then open again another 30 minutes later, and so on. Once we got the count restarted, the final four minutes were very quiet in the room, then once we got to T-0 and saw the vehicle lift off there was elation and cheering, followed by more quiet as we watched closely for each event during the overall six minute mission. As each of those milestones were hit, there was more cheering, followed by a big round of applause once we saw the FS parachutes open up.

What was it like being a key participant in the Ares I-X launch? What did you and your Glenn team learn from being a part of the project?
VB: It was a thrilling experience, and without a doubt the highlight of my career to date. I believe this is true for all of our USS team members at GRC and across the agency, for this truly was a once-in-a-career historic mission: the first flight of a new rocket vehicle in over a generation, since the Space Shuttle was developed in the 1970s.

We have learned a tremendous amount being part of this endeavor, starting with the hands-on, in-house engineering, design, analysis, manufacturing, handling, and transportation we performed with civil servants and in-house contractor team members. We developed rigorous flight hardware processes and procedures, and we put in place improved manufacturing tools and techniques. We also gained the experience of processing the flight hardware for launch in the Vehicle Assembly Building at Kennedy Space Center.

We have truly built our capacity to be a space flight development center during the execution of Ares I-X.