Grow Text SizeShrink Text Size
NASA's Ares I-X Ready to Launch
The Ares I-X flight test is scheduled to blast off in late October, accomplishing a huge milestone in NASA’s space exploration plans. This flight test, an essential first stepping stone in the Constellation program and the first flight test of Ares I, represents a successful collaboration between NASA centers all around the country. NASA’s Glenn Research Center in Cleveland, Ohio, is playing a pivotal role in this achievement. 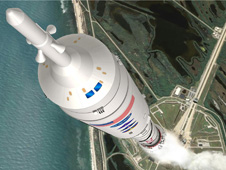 The first high-altitude test of the Ares I rocket that will launch astronauts on journeys to the International Space Station, the moon, and beyond is scheduled for October 27, 2009. The Ares I-X flight test vehicle will launch from NASA's Kennedy Space Center. Image Credit: NASA “It’s been almost 30 years since NASA and our partners have developed a new launch vehicle,” says Vince Bilardo, manager of Ares I-X Upper Stage Simulator effort. “That’s part of the objective of this flight: to demonstrate we still have the right stuff. We still have what it takes to design, develop, test and launch a new launch vehicle. A NASA government team can, in under four years, develop a brand new launch vehicle, process it and fly it.”

More than 200 people from NASA’s Glenn Research Center, in Cleveland, Ohio, spent almost 4 years developing and manufacturing the Upper Stage Simulator (USS), one of the five components that make up the Ares I-X. A wide array of talented specialists contributed to the project, Bilardo says. Project management, systems engineering, design engineering, structural mechanics, structural dynamics, fluid and thermal, manufacturing engineering, weld engineering, metallurgical engineering, technicians, test and verification, instrumentation, safety, reliability, and transportation and logistics were all involved in the successful production and delivery of the USS to NASA’s Kennedy Space Center in Cape Canaveral, Florida via truck and ship.

“The function of the Upper Stage Simulator is to simulate the weight, the aerodynamic shape and the center of gravity—how the weight is distributed—on what will eventually be the “real” upper stage that will fly on Ares I in a few more years,” Bilardo says.

The Ares I crew launch vehicle will be a workhorse vehicle in performing the Constellation missions, and the Ares I-X test is the first flight test of Ares I. The Upper Stage Simulator (USS) is the portion of the Ares I-X that extends from the top of the first stage to the bottom of the crew module. It weighs 430,000 pounds and is 110 feet tall and was built and delivered in eleven different segments. Each segment is 18 feet in diameter and an average of 9.5 feet tall. The huge steel cylinder segments are fastened together with 180 bolts on each of the flanges as they are stacked together to form the USS. The Glenn team affectionately called the segments “tuna cans” while in development, as they share a similar diameter to height ratio.

This nautical nickname is also fitting because the USS will be swimming with the fishes after its test flight. Approximately two minutes after launch, the Ares I-X will separate into two parts which will somersault from the sky into the ocean. While the First Stage will be recovered, the Crew Module Simulator and USS will become fish reefs on the floor of the Atlantic. 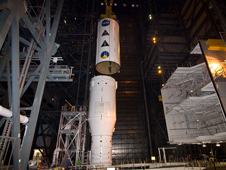 Super Segment 3 of the Upper Stage Simulator is lowered into position during Ares I-X vehicle mating in the Vehicle Assembly Building at Kennedy Space Center. Image Credt: NASA Although the USS won’t be returning to solid ground, the invaluable information generated during its test flight will. The Ares I-X flight test vehicle has been outfitted with about 700 sensors that will measure pressure, temperature, vibration and acceleration during the flight test. This data will be transmitted to the ground during the flight and also recorded on a flight data recorder located in the First Stage. This data will help with the final design of the Ares I vehicle.

A team of about twenty people from Glenn joined the USS at NASA’s Kennedy Space Center in Florida, assisting with hardware assembly, installing the avionic sensors and stacking the segments. At least one team member from Glenn has been at Kennedy continuously for the past year, and about ten will be on site for the launch. A team of four (including Bilardo) will serve on the launch support team in the back up firing room.

The Ares I-X project has been a collaborative effort between NASA centers all over the country, including Glenn, Kennedy, Langley Research Center in Hampton, Virginia, Marshall Space Flight Center in Huntsville, Alabama and Johnson Space Center in Houston, Texas.

“Five centers have been intimately involved over the last four years to pull this off, and we’ve developed quite a bit of camaraderie and team esprit de corps as a dedicated mission team. It’s really been a privilege to work with these folks,” Bilardo says. “Once you get to know people as well as we have on this project, those relationships endure for the balance of your career.”

In addition to providing essential hardware components to Ares I-X, Glenn has made significant contributions to the Constellation Program, including setting new standards for requirements verification regimes, acceptance review processes and management metrics for tracking budget process and schedule progress.