Future Forum Generates Ideas in Ohio
Did you know that 52 companies across Ohio supply materials or services to the Space Shuttle Program? As it prepares to retire the shuttle in 2010, NASA already has built partnerships with Ohio companies, such as Akron's Goodyear Tire and Motor Company and Cleveland's Parker-Hannifin, to develop new technologies for future missions to the moon and beyond.

NASA's economic impact in Ohio is deep and far reaching. In 2006, the agency created more than 7,360 jobs in the Buckeye State, producing more than $365 million in household earnings. It also contributed more than $12 million to Ohio universities. 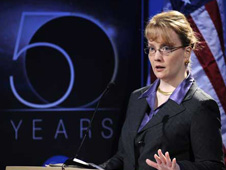 As the agency celebrates its 50th Anniversary, it aims to increase this impressive return to the citizens of Ohio. With this goal in mind, NASA joined Ohio political, business, technology and academic leaders on Feb. 21 to discuss the benefits of space exploration to Ohio's economy, now and in the future.

"Today, the state of Ohio remains one of America's great engines of progress with its thriving aerospace industries and with our Glenn Research Center contributing to our nation's technological advancement," said NASA Deputy Administrator Shana Dale. "You in Columbus are helping NASA build the space economy and creating a better world." 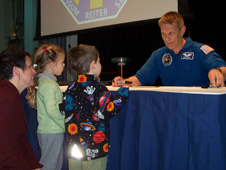 According to Landis, who served on the Discovery panel, the discussions were thoughtful and productive. The first question the moderator asked his panel was "of all the things NASA has done in the past 50 years, what was the most important discovery?"

Landis said every panelist responded differently to this question, and they all offered good answers. "My answer was the discovery that humans can go out and live and work and survive in space," he said. "There are all of these planets and solar systems, and until we went to the moon, we didn't really think of them as places. They were just pretty lights in the sky. Now they're places we can go." 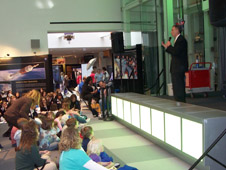 But how can NASA and Ohio prepare and inspire today's students to carry out these future missions to new destinations? The "Inspiration" panel discussed this question, exploring ideas that ranged from classroom practices to recruitment and retention efforts.

"We talked about the future workforce and how different they are from the workers who built Apollo and the space shuttle," Hairston said. "We realize that we are going to have to make some changes in order to continue to employ the best and the brightest."

To coincide with the Future Forum, the museum displayed 1,500 square feet of space exploration and science exhibits. Thousands of children and teachers toured the museum and participated in the day's events.

NASA's Future Forum is part of a yearlong series celebrating NASA's 50th Anniversary. The Forum made its first stop in Seattle and is destined for five more cities across the country.