The technology uses light to look into the eye as a "window to the body." It works because, for every tissue type in the body, there is a corresponding tissue type in the human eye. By measuring subtle changes in the tissues, fluids, and blood vessels of the eyes, it can detect health problems without contact. 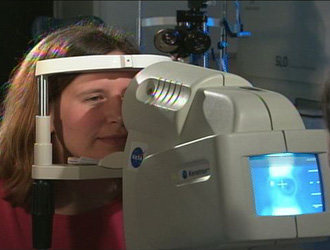 Image right: Probe being tested at the National Institutes of Health. Credit: NASA

Glenn researcher Rafat Ansari first incorporated the technology into a fiber-optic probe to look for cataracts, which occur when proteins in the lens of the eye gradually clump and eventually cloud the lens. Worldwide, cataracts cause 50 percent of blindness. They are caused by aging, disease (especially diabetes), smoking, dehydration, malnutrition, and ultraviolet light. Surgery is the only treatment currently available--resulting in 1.4 million cataract surgeries each year in the United States. In space, the exposure of astronauts to even relatively low doses of ultraviolet light and ionizing radiation can accelerate aging and cataract formation.

Often cataracts are not discovered until vision has already been impaired. Manual B. Datiles, III, in clinical tests at the National Eye Institute of the National Institutes of Health, is using the NASA probe to detect cataracts when they are very tiny (as small as 1 nanometer, or about five millionths of an inch). Diagnosing cataracts at such an early stage will allow researchers to study ways to treat them nonsurgically. The probe is also being used to check for abnormalities in the cornea of the eye before LASIK surgery (which is used to correct nearsightedness).

The probe is compact, portable and rugged, with point-and-shoot operation. It gives extremely sensitive, accurate particle-sizing measurements during a safe, short eye examination (2 to 20 seconds) using low laser radiation (10 nanowatts to 3 milliwatts), and there is no physical contact with the eye. In laboratory tests, it can be used with many sample container sizes, materials, and shapes. 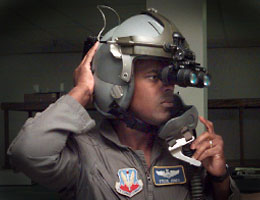 As an expanded version of the probe, the John Glenn Biomedical Engineering Consortium (a team from Case Western Reserve University, The Cleveland Clinic Foundation, University Hospitals, and The National Center for Microgravity Research--all in Cleveland, Ohio) is developing "Space Goggles," a head-mounted device that resembles night-vision goggles. It uses various forms of light to diagnose and monitor diseases of the eye and of the entire body. Rafat Ansari and Marco Cabrera (Case Western Reserve University and University Hospitals of Cleveland) are working on this powerful, compact device, which will integrate several noninvasive technologies into one portable, easy-to-use piece of equipment.

Early detection and monitoring of two of these diseases--diabetes and Alzheimer's--would be especially helpful.

Sixteen million Americans have diabetes mellitus, and millions more have undiagnosed diabetes, which increases the risks of complications such as cataracts, diabetic retinopathy, glaucoma, limb amputations, and kidney disease. Because the amount of glucose in a solution changes the rotation of linearly polarized light and because the concentration of glucose in the aqueous humor of the eye closely matches blood glucose levels, the probe can accurately measure blood glucose levels without skin pricks or even contact. Diabetes could be diagnosed earlier, treatment could be started earlier, and blood glucose monitoring could be done painlessly and more frequently, improving diabetes control.

Alzheimer's disease is characterized by protein deposits called amyloids that are found in the brain. Currently, these can only be found when an autopsy is performed after death. Before that, the diagnosis is uncertain. However, because these proteins are also deposited in various parts of the eye, dynamic light scattering could be adapted to diagnose Alzheimer's disease much earlier, allowing for better research and earlier treatment with anti-inflammatories, anti-oxidants, hormones or other drugs to possibly delay the disease.

Such an instrument could be used during a routine eye exam to detect early signs of health problems, and blood glucose and cholesterol levels could be measured without blood samples. With such an advanced warning system, researchers could study the effectiveness of experimental drugs and therapies. In addition, it could be used on Earth to diagnose medical problems in remote settings.

If your company is interested in taking advantage of this or other technologies, contact Glenn's Technology Transfer and Partnership Office.