Destructive Power of Atomic Oxygen Used to Restore Artwork
NASA research into the damage to satellites caused by atomic oxygen in low Earth orbit has led to a new way to restore damaged artwork.

Atomic oxygen is an elemental form of oxygen that does not exist in Earth's atmosphere. In space, however, it is common in the area where satellites orbit Earth. There, it reacts with other materials very easily and exposes satellites and spacecraft to damaging corrosion. Researchers at NASA's Glenn Research Center study these damaging effects in order to find materials and methods to extend the lifetime of communication satellites, the Space Shuttles and the International Space Station.

While developing methods to prevent damage from atomic oxygen, researchers discovered that atomic oxygen could remove layers of soot or other organic (carbon-based) materials from a surface. Because atomic oxygen will not react with inorganic oxides, such as most paint pigments, it could be used to restore paintings damaged by soot. For paintings containing organic pigments (which could be damaged by the atomic oxygen), the exposure could be carefully timed so that the removal would stop just short of the paint pigment. 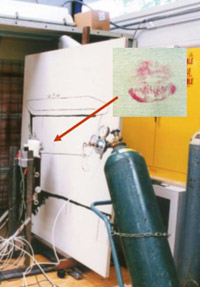 It has been estimated that, worldwide, an average of one collection or gallery suffers fire damage every day, and paintings damaged by charring are very resistant to traditional cleaning techniques. Current processes used to restore artwork generally use chemical solvents to remove dirt, varnish and thin layers of soot. With damage from heavy deposits of soot, or even charring or graffiti, these techniques are not effective.

In 1996, Glenn researchers Bruce Banks and Sharon Miller were contacted by conservators from the Cleveland Museum of Art about the possibility of using new restoration techniques at the NASA Electro-Physics Branch. The Electro-Physics Branch had facilities (simulating the low-Earth-orbit environment) which produce atomic oxygen that could potentially be used to restore artwork. The first tests were done on two religious paintings damaged by an arson fire at St. Alban's Church in Cleveland Heights, Ohio. Both paintings were found to be unsalvageable by conventional art restoration wet chemistry techniques and were provided to NASA to test its atomic oxygen cleaning process.

The technique not only removed the soot, but it cleaned the paintings so effectively that colors that had been faded by time were brighter, and more detail could be seen than before the fire. The success encouraged the art community to risk more important works of art to test the technique further.

In 1998, the atomic oxygen restoration system had its first big success. The Andy Warhol painting "Bathtub," estimated to be worth several hundred thousand dollars, had been kissed by a vandal during a party at the museum. Because Warhol had not varnished the painting, conservators at the Carnegie Museum of Art in Pittsburgh, Pa., were concerned that traditional solvents would cause the lipstick to soak into the painting and make things worse. Until they heard about Glenn's atomic oxygen restoration system, conservators had been resigned to keeping the painting in permanent storage.

Image right: Interaction of the Space Shuttle with the upper atmosphere creates a corona seen at night due, in part, to atomic oxygen. The left photograph is during the day, and the right photograph is at night. Credit: NASA

Glenn researchers built a portable version of the atomic oxygen device and transported it to the museum. Preliminary tests were done outside of the viewing area; then the device was used successfully to remove the lipstick smudge. In addition to the St. Alban and Andy Warhol paintings, a fire-damaged Roy Lichtenstein ink drawing on paper has been cleaned along with two smoke-damaged paintings from St. Stanislaus Church (Cleveland).

In the upper reaches of the atmosphere, about 200 to 500 miles above the Earth, atomic oxygen is created by exposure to intense solar ultraviolet light. Oxygen molecules (two oxygen atoms bonded together as O2) decompose into two separate oxygen atoms, or atomic oxygen.

Because the unpaired atoms react very easily with other materials, they are very destructive to spacecraft and satellites, but very beneficial for cleaning surfaces on Earth. Atomic oxygen can remove any organic coating (a compound containing carbon) from a painting that contains inorganic paint pigments by reacting with the organic coating. This forms a gaseous byproduct while leaving the inorganic pigments undisturbed.

Image right: This closeup shows a beam of atomic oxygen that was used to clean artwork. Credit: NASA

The process is environmentally "green." No solvents are used or produced and only byproducts of the atomic oxygen formation and reaction processes are trace amounts of ozone, carbon monoxide and carbon dioxide. Atomic oxygen treatment can restore works of art when there is surface char or when there are defacements or contaminants on surfaces on which solvents cannot be used.

The invention can remove all types of organic protective coatings uniformly over the surface without physical contact, which could alter the painting. Low spots and high spots on the painting surface can be cleaned equally well.

In June 2004, Glenn researchers, Bruce Banks and Sharon Miller received the Jumpstart Innovation Award from NorTech for their atomic oxygen restoration system. After that, their innovation received a prestigious R&D 100 Award for 2002 from Research and Development Magazine, which also gave the technology an Editor's Choice Award: bestowed on the entry that the editors consider to be the most innovative.

Art restorers are extremely cautious because careless cleaning could easily damage the unique and highly valuable paintings and prints that they are called on to restore. So, in the years since the patents were issued, the process has been tested to determine its ability to safely treat the range of media typically used by artists (oil paint, acrylic paint, acrylic gesso, watercolors, pen and ink, and others). In 2001 validation testing was completed, and the process was deemed to be acceptable for functional art restoration and ready for licensing. Atomic oxygen is now safe for cleaning artwork where conventional techniques have not been effective.

The experience gained from studying atomic oxygen damage to spacecraft led to its use to restore works of art. Now NASA is applying the experience gained restoring art to further understand space exposure as well as for a variety of other medical and industrial applications. One interesting application is the removal of biocontaminants from the surfaces of orthopedic implants (such as artificial hip joints) prior to surgery. NASA researchers continue to turn the damaging effects of atomic oxygen on spacecraft into beneficial uses here on Earth.

For more information about this subject, search on "atomic oxygen" in the Glenn Technical Reports Server.

If you would like to develop this technology or use it for other applications, please contact Bruce Banks, Bruce.A.Banks@nasa.gov, (216) 433-2308.