During the Middle East oil crisis, we developed a new generation of high-speed propellers for commercial aircraft that demonstrated the potential to reduce passenger aircraft fuel consumption by 25 percent. Glenn then led the Energy Efficient Engine Project that developed and demonstrated technologies to significantly reduce the emissions from and improve the fuel economy of jet aircraft engines. The project demonstrated a 15 percent reduction in fuel consumption relative to the best commercial aircraft engines in service at the time. These accomplishments enabled the development of the GE90 jet engine, the world's most powerful aircraft engine, which powers Boeing's newest intercontinental aircraft, the Boeing 777. 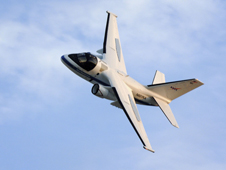