SMiRF and CCL-7 are currently being used to develop technologies for an in-space cryogenic depot: an orbiting "gas station" to refuel vehicles before they head for the Moon or Mars. Over the next 4 years, Glenn (in partnership with the NASA Marshall Space Flight Center) will conduct a wide variety of tests in its cryogenic facilities to ensure the safety and efficiency of this depot.

In low gravity, surface tension causes most liquids to adhere to and wrap around the tank wall instead of collecting at the tank "bottom." This makes it hard to determine how much propellant is in a tank. This tendency also causes difficulties in transferring fuel. Another problem for an in-space refueling depot is that solar heating can cause propellants in the storage tanks to boil, increasing pressures. For safe operation, a zero-boil-off system is needed to keep heat from reaching the tank or to refrigerate the propellants so that they do not need to be vented to prevent pressure buildup. Glenn's in-space cryogenic depot research includes tests for developing a low-gravity gauge to determine how much propellant is left in a tank, long-term zero-boil-off storage tests of cryogenic propellants to reduce losses and make smaller storage tanks possible, and tests of devices for transferring cryogenic propellants in space. 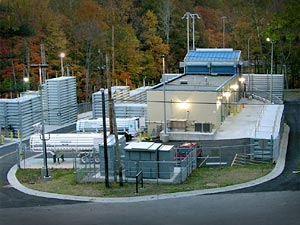 SMiRF and CCL-7 were recently relocated to Glenn's Creek Road Complex by the city of Cleveland to clear the path for a new runway at the Cleveland Hopkins International Airport. On October 18, 2004, Glenn officials and the mayor of Cleveland shattered carnations--that had been frozen to cryogenic temperatures in liquid nitrogen--against SMiRF to celebrate the opening of the relocated facilities.

Liquid hydrogen, liquid nitrogen, gaseous hydrogen, gaseous nitrogen, and gaseous helium are currently available at the new Creek Road Complex. The facilities can also accommodate other cryogenic fluids, such as liquid methane. The relocated facilities were updated with state-of-the-art controls and data-acquisition systems. In 2005, Glenn plans to enhance the facilities for liquid oxygen testing. 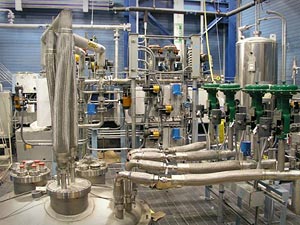 The center of SMiRF is a cylindrical vacuum chamber that can simulate the very low temperatures and pressures in space and on the Moon and Mars. The chamber can accommodate test items as large as 71 inches in diameter by 90 inches high. It can maintain a vacuum environment or can be evacuated to simulate the pressures experienced by a Space Shuttle as it ascends through the Earth's atmosphere and into space. A thermal shroud can be programmed to simulate lunar or Martian "day-night" temperatures from -260 to 190 degrees Fahrenheit. SMiRF's state-of-the-art data-collection system can collect up to 425 channels of data. A programmable logic controller controls the facility operations, and a personal computer can be used to easily adapt the facility for new test programs. 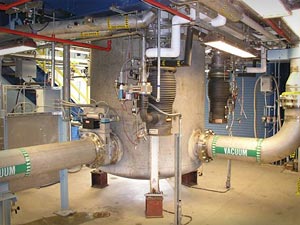 CCL-7, the smaller of the two test facilities, has two small cryogenic tanks for evaluating components and testing fuel flow and transfer. These special double-walled vacuum tanks have 5.8- and 11.5-cubic-foot capacities--a little larger than one and two oil barrels, respectively. The tanks can condition liquid hydrogen at pressures as low as 2 pounds per square inch (less than one-seventh of the normal atmospheric pressure on Earth), and flow tests can be done by transferring fluid between the two tanks. The relocated facility has new data and control systems comparable to those at SMiRF. Up to 320 channels of data can be collected.