Grow Text SizeShrink Text Size
What's in a Name?
A rose by any other name may smell as sweet. But would a mission to the moon named "Pegasus" have the same appeal as Apollo? Thanks to Dr. Abe Silverstein, former director of NASA's Glenn Research Center, we'll never know. Silverstein named Mercury and Apollo after mythical Greek gods while he was serving as NASA's Director of Space Flight Programs in the late 1950s. 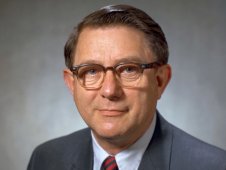 Portrait of Dr. Silverstein. Credit: NASA He left his mark on the agency -- not only by naming its first human spaceflight missions, but also by demonstrating legendary leadership, innovation and enthusiasm throughout his career.

Silverstein began his career in 1929 with the National Advisory Committee for Aeronautics (NACA) at Langley Field, where he helped design the Full Scale Wind Tunnel. That tunnel increased performance of World War II aircraft.

He transferred to Cleveland's Aircraft Engine Research Laboratory, now Glenn, in 1943 to oversee the new Altitude Wind Tunnel. As Chief of the Wind Tunnel and Flight Division, he directed propulsion research that led to improvements in turbojet aircraft engines. He also designed and constructed the laboratory's first supersonic propulsion wind tunnels. The two largest, the 8-by-6 and 10-by-10 foot tunnels, contributed to the development of the supersonic aircraft.

Silverstein was named Director of Research in 1949 and Associate Director in 1953. In these roles he championed alternative propulsion methods such as nuclear propulsion, the ion engine and high-energy liquid propellants, like liquid-hydrogen.

In 1958, Silverstein was called to serve at the NACA headquarters in Washington, D.C. He and his colleagues transformed the NACA into NASA, and he became Director of Space Flight Programs. In this position, he planned and directed the nation's first spaceflight missions, which he named Mercury and Apollo, after ancient Greek gods. 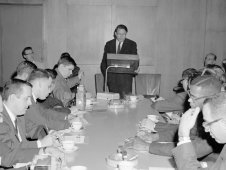 Dr. Silverstein speaks at a recruiting conference. Credit: NASA Silverstein chose the name "Apollo" after perusing a book of mythology at home one evening in 1960. He said the image of "Apollo riding his chariot across the sun was appropriate to the grand scale of the proposed program."

According to Glenn archivist Bob Arrighi, Silverstein's role in advancing [Glenn] and the early space program in general can hardly be overstated. Silverstein combined his technical acumen with a broad vision of the future of aeronautics and space.

"Silverstein was a genius at instantly grasping the essence of a problem, proposing a solution and delegating the task to the experts at the lab to resolve," Arrighi said.

In 1961, Silverstein returned to Cleveland and took the helm of the Lewis Research Center (now Glenn) as its director. He was a driving force behind Centaur, the country's first high-energy upper-stage rocket. Centaur launched the Surveyor robotic spacecraft to the moon and launched Mariner, Pioneer, Viking and Voyager as well as numerous satellites. He retired eight years later.

In 1997 Silverstein received the prestigious Guggenheim Medal for his "technical contributions in advancing technology of aircraft." He died four years later at the age of 92.

"Silverstein influenced the development of the first American jet engines and ramjets, the use of liquid-hydrogen as a propellant, the Centaur rocket and many of the early space missions," Arrighi said. "He contributed to the creation of Glenn's supersonic tunnels and to the foundation of NASA itself. Any one of these items would have been an important accomplishment on its own."