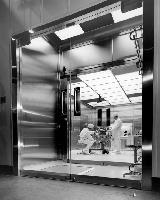 NASA's Glenn Research Center began the Space Electric Propulsion Test (SERT) in the 1960s. The program aimed to prove that an electric rocket could produce effective thrust in space by neutralizing rocket exhaust composed of high-velocity ions of mercury. This was accomplished by spewing a beam of electrons into the ion stream within the exhaust.

In 1964, a pair of Glenn ion engines were launched on a Scout rocket from Wallops Island, VA, under the name Space Electric Rocket Test 1 (SERT 1). One of the two thrusters onboard did not work, but the other operated for 31 minutes.

Over a 3.5-year development period, from 1966 to 1970, Lewis undertook an effort to design, fabricate, and qualify a new ion thruster system and the supporting spacecraft components for a follow-up mission, SERT 2. It was launched in 1970 on a Thor Agena rocket from Vandenberg Air Force Base, CA under the management of Glenn. SERT 2 carried two ion thrusters, one operating for more than five months and the other for nearly three months.

Extended ion thruster restarts from 1973 to 1981 were conducted, in addition to cross-neutralization tests. Tests of a reflector erosion experiment were continued in 1989 to 1991. The continuing performance of spacecraft subsystems, including the solar arrays, over the 1970-1991 period was also monitored as well as thruster-spacecraft interactions.