When Larry Ross was 14 years old he built his first shortwave radio and transmitted to another electronics enthusiast thousands of miles away. That basic experience triggered Ross's interest in electronics and ultimately launched a career with NASA. He went on to become the seventh director of NASA's Glenn Research Center, 1990 to 1994. Recruited fresh out of Manhattan College in New York, Ross packed his bags and his Bachelor of Science degree in electrical engineering to come to then NASA Lewis in 1963. 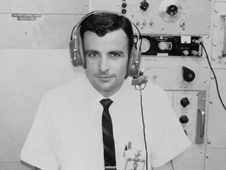 Ross analyzes the performance of Centaur's electronics systems in the vacuum chamber in the mid 1960s. During most of his career, Ross served in an executive capacity, including as deputy director from 1987 to 1990. He also had worked as a design and test engineer responsible for environmental testing of the Centaur launch vehicle stage and for integration of the Surveyor spacecraft with the Atlas/Centaur launch vehicle. The editor of NASA Glenn's AeroSpace Frontiers newsletter recently caught up with Ross and asked him a few questions about his time at the center, and what's keeping him busy these days.

Q. What brought you to NASA?
A. Space was in its infancy but very prominent at the time [race to the moon], so I was drawn by its aura. I thought my electronics background would do nicely. Plus, NASA would pay for graduate school.

Q. What is your fondest memory of NASA?
A. It wasn't a project or a time that was most memorable. It was the outstanding quality of people who I worked with that made a difference in my life and in the agency.
The people kept a grin on my face and a whistle on my lips.

Q. What advice do you give to young people at NASA?
A. Spend 6 months listening and watching for the person (or people) who everyone listens to because he or she is credible, honest and competent. Find that person and attach yourself to she or he. That is your mentor. 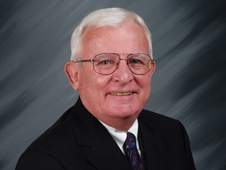 Q. What keeps you busy these days?
A. After I retired from NASA, I consulted for aerospace companies and government agencies, including NASA. In 2007, fellow NASA retiree Joe Nieberding and I developed Aerospace Engineering Associates. We mobilize the first generation of space faring professionals, who have retired from NASA and its contractors, and deploy them as a resource to those charged with the responsibility for carrying out today's programs. We conduct training sessions for industry and government agencies using case studies and provide lessons learned from our experiences in the industry. We tell people what not to do. The website is http://www.aea-llc.com/.