Grow Text SizeShrink Text Size
John McCarthy Promoted Outreach, Embraced Diversity
Coming from the world of academia, former center director John F. McCarthy appreciated the talent working for NASA's Lewis Research Center (now Glenn) and considered the center an example of the nation's best and brightest. When he arrived at Lewis in 1978, he already had firm goals in mind. He planned to promote Lewis and increase the number of minorities and women working for the center.

McCarthy started working toward these goals immediately by granting the largest architectural engineering services contract NASA had ever entered into with a minority-owned firm, Madison and Madison International. On January 12, 1979, ground was broken for the Research Analysis Center (RAC), the first major research facility added to Lewis in more than a decade. Recognizing the center's expertise in research, McCarthy wanted to bring Lewis up to speed in computable mechanics. He was a proponent of computer analysis to help employees be more efficient and reduce the need for costly tests in the process of development and certification. The RAC was designed in part by Madison and Madison.

In 1980, McCarthy supported an initiative to install coaxial cable at Lewis. The goal was to connect the RAC with other buildings to expand on the existing Lewis Information System, thus creating a communications network for data and television transmissions, better known as the LINK. 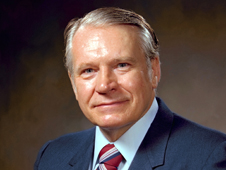 "A strong speakers program is a Lewis asset," McCarthy said. "It permits us to tell in-person the story of Lewis and NASA accomplishments. Such efforts help to make the public aware of the achievements and benefits of the nation's aerospace program."

The center's improved community relations and McCarthy's success at advancing the Lewis image impressed then NASA Administrator James M. Beggs. In particular, Beggs was proud of the outreach events in the greater Cleveland area that helped local citizens learn about the work being done at Lewis, which had been McCarthy's goal from his arrival.

McCarthy's support for bringing a Rapid Transit Authority bus line to the center, beginning May 17, 1981, was predicated on providing employee access to mass transportation to avoid the high costs of gasoline and offering greater public access to the Visitor Information Center.

When McCarthy resigned as Center Director in 1982, Beggs commented, "John, I know, will be remembered here at Lewis not only for his sardonic wit, but for his strong promotion of Lewis programs in the Cleveland area and throughout the nation."

After he resigned, McCarthy returned to his previous job as professor of aeronautics and astronautics at the Massachusetts Institute of Technology. McCarthy's achievements were recognized in "Notable Americans of 1978-1979,” the 1970-1980 Bicentennial Memorial edition of “Community Leaders and Noteworthy Americans," the first edition of “Men and Women of Distinction” and the seventh edition of "Men of Achievement."

McCarthy died suddenly on February 7, 1986. His legacy lives on through his belief in strong communications for the center.