Grow Text SizeShrink Text Size
Lundin Advocated for Strong Role in Space Exploration
If Bruce Lundin, NASA's Lewis Research Center (now Glenn) Director from 1969 to 1977, was in charge today, he would be thrilled with the level of activity underway at the center. Lundin not only supported the creation of a national space agency, but he also advocated for NASA's predecessor, the National Advisory Committee for Aeronautics (NACA), to take on a strong leadership role in space hardware development. 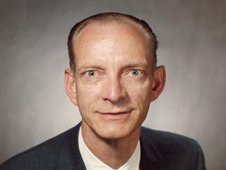 Portrait of Bruce T. Lundin. Credit: NASA "[I] definitely thought that we [NACA] should be responsible for the building and operation of launch vehicles and spacecraft just as we had always built and operated test models in our wind tunnels," said Lundin in a 1987 interview.

With the transition of NACA to NASA in 1958, the agency refocused its efforts by integrating hardware development into NASA goals. When the division between research and development became official in 1961, Lundin was serving as Assistant Director. Center Director Abe Silverstein then appointed Lundin Associate Director for Development. Lundin assumed the role of Center Director when Silverstein retired in 1969.

During the energy crisis of the 1970s, the center broadened its development capabilities, developing new energy conservation and conversion technology to address growing public concern. Lundin oversaw the building of an experimental wind turbine at Plum Brook Station near Sandusky. The center also developed solar-powered electric systems for remote areas such as the village of the Papago Tribe at Schuchuli, Ariz., which became the first solar-powered village. Lundin was especially proud of the creation of the center's Energy Programs Directorate, which he noted in his final State of the Center address in 1977.

While Lundin promoted the center's increased role in development, he also recognized the importance of maintaining the center's leadership in space research, which he believed was a matter of national survival.

"In our technological age, it will be the country that advances in science that will have the greatest impact on the emotions and imagination of men, that will command respect, and that will gradually assume world leadership," Lundin said. (Engines and Innovation) 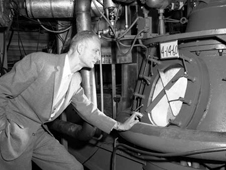 Bruce Lundin at the Rocket Laboratory. Credit: NASA Lundin felt strongly that both research and development for the new frontier of space exploration should be conducted in the public sector by a civilian agency. His daughter, Dianne Haskell, remembers his emphasis on this during the early days of NASA.

Lundin oversaw NASA's Cleveland center through some of its most challenging years, and except for a one-year detail to NASA Headquarters, he spent his entire 34-year career helping to shape its future within the agency. When reflecting on the significance of his influence at NASA's Glenn Research Center, Lundin once noted, "[I have] a deep sense of gratitude for it is not often someone who helps build an organization gets to direct that organization."

Lundin received many awards for his work and leadership, including NASA's highest award -- the Distinguished Service Medal in 1971. Lundin died on January 24, 2006, at the age of 86. Cassie Barnes (LERCIP Intern)
› Back To Top