The Origins of Lewis Field
The history of Lewis Field begins with the National Air Races, held in Cleveland throughout the 1930s. Conducted at what is now Hopkins International Airport, the races were a major aviation event each year. Thousands of people came to view them. To accommodate the large crowds, bleachers and a parking lot were built on a field just west of the airport. > 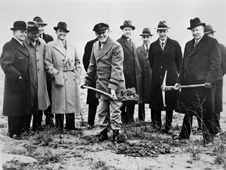 When the National Advisory Committee for Aeronautics, NASA's predecessor, decided in 1939 that it needed a new laboratory to supplement the Langley Memorial Aeronautical Laboratory near Hampton, Virginia, the city and Chamber of Commerce proposed Cleveland as the site. However, the Calif. aircraft industry was successful in getting the lab (now the Ames Research Center) built at Moffett Field near Sunnyvale instead.

When Charles A. Lindbergh returned to the U.S. from Europe in 1939 on the eve of World War II, he was worried that engine developments in England and Germany were a threat to America. Lindbergh chaired a Special Committee on Aeronautical Research Facilities which recommended building a new engine research laboratory near the aircraft engine companies.

Cleveland competed with 19 other sites for the new lab. Among the criteria that were being used for selection were: 1) A site adjoining a suitable airport, 2) Power and water resources for wind tunnel operation, 3) Location near aircraft engine companies, and 4) A location that is not vulnerable to enemy attack (i.e., not on either coast). The strategic vulnerability of the NACA's other two laboratories to potential future enemies made the Midwest appear an attractive location. The fields to the west of Cleveland's airport were select for the site of the new Aircraft Engine Research Laboratory.

Groundbreaking ceremonies for the new lab were held at the site in Cleveland on January 23, 1941, and the new NACA Aircraft Engine Research Laboratory was born. In April 1947 the Cleveland laboratory was renamed the Flight Propulsion Research Laboratory to mark its transition from an engine laboratory, charged with assisting industry with its wartime development problems, to a laboratory with the freedom to explore areas in propulsion research that seemed to hold promise for the future. The following year, after the death of George W. Lewis, the Director of Aeronautical Research for the NACA, the laboratory was renamed in his honor as the Lewis Flight Propulsion Laboratory. On October 1, 1958, when the NACA dissolved and NASA was born, the lab became part of the new agency and was renamed the NASA Lewis Research Center.

Today, Lewis Field is a 350-acre site upon which the main campus of the NASA Glenn Research Center is built. The center comprises over 150 buildings, which contain a unique collection of world-class facilities.