Grow Text SizeShrink Text Size
Klineberg Inspired Many Alliances
Dr. John M. Klineberg made his mark at NASA's Lewis Research Center long before he was named center director in July 1987. While serving as deputy director (1979–1985) and then acting director (1986), he helped strategize and implement institutional improvements, both facilities and personnel, to maintain our excellence in aeronautics and attract major work for the International Space Station.

Prior to joining Lewis, Klineberg served at Ames Research Center and then at NASA Headquarters as deputy associate administrator for Aeronautics and Space Technology. There he was part of the Aircraft Energy Efficiency Program to address the nation's high fuel prices. Three of the major program activities—Engine Component Improvement, Energy Efficient Engines and Advanced Turboprop (Prop-Fan)—were assigned to Lewis. During Klineberg's first year as center director, Lewis and its industry partners received the prestigious 1987 Collier Trophy in recognition of their work on the Prop-Fan engine. 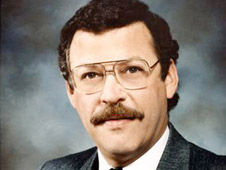 Former Center Director Dr. Klineberg in 1998. Credit: NASA "When I came to Lewis in 1979, there were the usual threats about closing the center, the Cuyahoga River had just caught fire, and the City was facing some very real economic problems," Klineberg said. "I became involved with various city groups to promote and maintain better relations between the center, the aerospace industry and the local community."

One of Klineberg's most important accomplishments was building consensus with all those entities to launch an idea that became the Ohio Aerospace Institute (OAI). Klineberg envisioned a nearby world-class institution devoted to research and graduate and continuing education beneficial to Lewis' engineers, while providing industrial assistance and technology utilization to aid state and local development. OAI became operational in the fall of 1989 and continues to flourish as a government-industry-academia alliance granting doctoral degrees in aerospace-related engineering disciplines and engaging in numerous aerospace activities.

"Today I still have the view that our nation's future depends on vigorous funding for science and engineering, just as it did when we established the [OAI] 20 years ago," Klineberg said during OAI's 20th anniversary celebration last year. "Institutes like OAI can be very effective mechanisms for combining the research programs in the federal, state and private sectors." 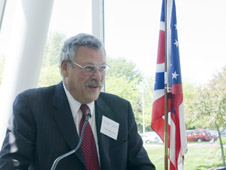 Klineberg giving the keynote address at OAI's 20th Anniversary celebration in 2009. Credit: NASA In 1990, Headquarters called on Klineberg to undertake another challenge to lead the Goddard Space Flight Center as their new center director. His departure was hastened by the significant task awaiting him—responsibility for the historic first servicing mission to the Hubble Space Telescope. In 1995, Klineberg retired from NASA taking with him numerous NASA medals and awards of distinction, in addition to the Presidential Rank of Distinguished Executive and Meritorious Executive.

Klineberg moved back home to California, where he continued to make significant contributions in aeronautics and space systems through private industry. From 1995 to 2003, he worked at Space Systems/Loral (SS/L) leading development and deployment of Globalstar satellite constellations (2000), which ushered in a new generation of cellular telephonic devices. He retired to care for his wife, Anne-Marie who passed away in 2004, but returned to industry briefly in 2005, as interim CEO with Swales Aerospace in Beltsville, Md.

Klineberg currently resides in Redwood City, Calif., where he operates his own consulting company and is a member of the U.S. Air Force Scientific Advisory Board. His three sons continue to be his greatest source of pride: Eric, a spine surgeon; Arnaud, a director of a software firm; and Logan, a self-employed computer systems specialist.